The Emek Sholom [valley of peace] Holocaust Memorial Cemetery was established on November 6, 1955. The cemetery is located within Richmond ‘s Forest Lawn Cemetery . The memorial cemetery was created by the New American Jewish Club of Richmond. Members of this group are survivors of the Nazi reign in Europe . The Holocaust Memorial is one of the first of its kind in North America . The New American Jewish Club of Richmond raised the money to erect a memorial dedicated to two hundred of their family members who died during the Hol 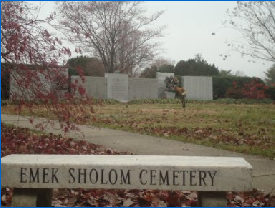 ocaust and whose bodies were never recovered. Originally, there were two panels on which family members’ names were placed and a central stone. In 1999 two more flanking panels and 237 more names were added to the existing markers to honor. This was done to memorialize victims of newer Jewish Richmond-area residents.

The Virginia Department of Historic Resources recognized the Emek Sholom 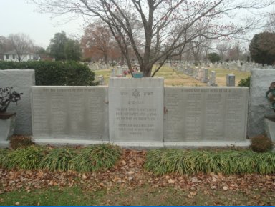 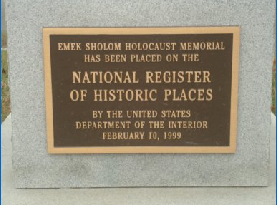