The Ekoji Buddhist Sangha was founded in Richmond in 1986 and is a member of the Buddhist Churches of America. According to its official website, the Buddhist Churches of America is an “an incorporated religious organization of American Shin Buddhist affiliated with the Jodo Shinshu Hongwanji-ha Hongwanji [(a group associated with Pure Land Buddhism)] denomination within the Continental United States.” The organization was formerly established in 1944, but its roots go back to 1889 when the first Shin Buddhist priest arrived in Hawaii. Shin Buddhism relies on the teaching of the Way of Nembutsu by Shinran Shonin ( 1173- 1263). By following the Way of Nembutsu, practitioners are able “to become aware of the ignorant self and to rely upon the Infinite Wisdom and Compassion of Amida Buddha.” Reverend Kenryu Takashi Tsuji (1 920-2004), a Shin Buddhist priest, encouraged the creation of Richmond’s Ekoji Buddhist Sangha as not just a place for Pure Land worship, but a home for multiple Buddhist sects. 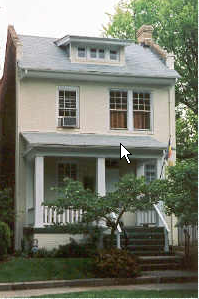 Born in Canada in 1919, Reverend Tsuji received his religious education in Japan and became a member the Nishi Hongwanji sect of Shin Buddhism. In 1968, Reverend Tsuji was elected as the first North American-born bishop of the Buddhist Churches of America. During his time as bishop from 1969 to 1981, Reverend Tsuji traveled around the country to visit members of the Buddhist Churches of America and spread awareness about Shin Buddhism. After his retirement, Reverend Tsuji and fellow reverend, Dr. Yehan Numata (who was also a highly successful Japanese businessman), began to plan the first Shin Buddhist temple in the Southeast, which would be located in Northern Virginia. This temple was established in 1981 and continues to be active.

With Shin Buddhist roots already present in Virginia through the Springfield temple, Reverend Tsuji received a request in 1985 from Richmond followers of Pure Land Buddhism who desired a place to worship. In response, he purchased a house with the financial aid from Dr. Numata’s Bukkyo Dendo Kyokai, a Japanese society for the promotion of all sects of Buddhism . The house, located at 3411 Grove Avenue in the Richmond’s Museum district, began having services in 1986.

Although Ekoji originally served a single group of Shin Buddhist worshippers, it would soon diversify and become home to five separate lineages of Buddhism, all while keeping an affiliation with the Buddhist Churches of America. This diversification began in 1987 when a group of Vietnamese Buddhists were invited to use space at Ekoji for worship. This group would outgrow Ekoji and form its own association (the Richmond Buddhist Association) and temple in 1989, but in 1998 a second Vietnamese group would use Ekoji’s space for worship. In 2001, this group would also leave Ekoji to join the Richmond Buddhist Association. Ekoji’s lasting tradition of sharing space is reflected in the various sects that have a permanent home at the temple.

A second permanent group, the Kagyu Shenpen Tharchin Tibetan Buddhist practice and study group, began meeting at Ekoji in 1993. Ekoji’s Tibetan group members are followers of Lama Norlha Rinpoche, an abbot of Kagyu Thubten Choling, in New York. Soon after the Tibetan group was established, a Vipassana (part of the Theravada Buddhist tradition) group also began meeting at Ekoji. The Vipassana group’s most prominent teacher is Taraniya Ambrosia, who visits Ekoji twice a year. This group is particularly notable because it is the first group at Ekoji that worships in the Theravada, rather than Mahayana Buddhist tradition. Ekoji’s newest permanent group is the Richmond Meditative Inquiry Group, which was established in 2005. The Meditative Inquiry Group is inspired (but not led by) Toni Packer, who founded the Springwater Center for Meditative Inquiry and Retreats in New York. Through the writings and guidance of Packer, the groups practice is derived from the Zen Buddhist tradition as well as the teachings of J. Krishnamurti and Sri Nisargadatta Maharaj.

Ekoji’s oldest and most established group, the Pure Land group, has also evolved since the temple was founded. Although it began with an association with Reverend Tsuji ’s Jodo Shinshu Hongwanji-ha Hongwanjid denomination, in recent years it has become more affiliated with Chinese Pure Land Buddhist practices. The Pure Land group also receives guidance from the Venerable Chueh Chuan from Raleigh, North Carolina. The Venerable Chuan is a female priest and member of the Buddha’s Light International Association ( a Chinese Buddhist organization based in Hacienda Heights, California), When visiting Ekoji, the Venerable Chuan conducts services in Chinese.

In 1998, Ekoji began a continuing prison outreach program at the Greensville Correctional Center, in Jarratt, Virginia. The correctional center’s chaplain first contacted Ekoji for assistance when inmates requested Buddhist spiritual guidance. Volunteers from Ekoji visit Greensville once a week on a regular basis to help provide guidance while leading meditation and discussion groups. In addition to volunteering at the prison, Ekoji has also donated books and meditation supplies for use by inmates. Ekoji also holds a monthly Dharma Movie Night, during which a Buddhist-themed film is shown and discussed afterwards. The event is free and open to the Richmond.

Since there are no resident priests at Ekoji, the temple operates as a non-profit religious organization which relies solely on donations for financial support. Some of this financial support comes from Ekoji members, who are divided into two types. Associate members assist the temple through monetary contributions, while participating members are those who give both time and money in supporting Ekoji. Participating members are also responsible for approving the temple’s annual budget and electing Ekoji’s board of directors, which handles the dispersion of temple resources.