The planning for what was to become Ebenezer Baptist church began in 1856 when Dr. Robert Ryland formed a committee to find a location for the church. The committee met at the home of Mr. John Adams where Mr. Benjamin Harris told those assembled of a vision that he experienced. He reported that where Ebenezer Baptist Church now stands a man with outstretch arms appeared on a body of water and said “I have chosen this spot from the foundation of the world as the place for the fishing of men’s souls.” Then and there the group decided that this location would be the site for the New Third African Baptist Church. Prior to 1856 there were no “colored” churches in the area. The First Baptist Church allowed “some colored” to worship in the church balcony. 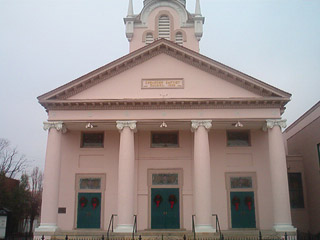 When attendance among the “colored” rapidly increased, there was a need to establish a new “colored” church in the area. Reverend Robert Ryland served as the first pastor since persons of color could not pastor churches prior to the Civil War. Reverend Ryland also adopted the name Ebenezer Baptist Church while he was pastor. The membership of the new Ebenezer Baptist Church consisted of all colored worshipers who lived west of Second Street and north of Broad Street.

On the day that the new church was dedicated in 1858, Dr. W.T. Lindsay of Grace Street Baptist Church was appointed pastor of the new congregation. In 1864, the Reverend Peter Randolph became the first African American pastor and the third pastor of Ebenezer Baptist Church. Two years later the first public school for African American children of Richmond was established in the church’s basement.

Sunday morning services consist of Sunday school and two morning worship services. During these services, prayer, scripture readings, hymns, an offering, and sermons are the typical program. Ninety-five percent of the congregation is African American, with the remaining five percent consisting of non-African Americans who may attend service on special occasion. The average attendance for a Sunday morning worship service is approximately 1,000. There are additional activities planned throughout the week, including choir practice, Bible Study, Prayer & Praise, and Youth Bible Class. The congregants of First African Baptist celebrate the traditional holidays of Easter, Palm Sunday, Thanksgiving, and Christmas.

Ebenezer Baptist Church has Christian Education Ministry for the congregation and the surrounding communities of Richmond. The missions focus on Adult Work, Children’s and Youth Work, Leadership, Family Life, and Stewardships and Missions. The church considers these ministries as ways bring the congregation into the right relationship with God through liberating educational programs for both youth and adults. Participants are encouraged to learn biblical content and apply teachings to their personal and public life experiences.