In Late 2005 Valerie and Jeff Althoff purchased a storefront shop on Main Street just west of Virginia Commonwealth University in Richmond. The couple had dreamed of owning their own small business for years and decided to open a coffee shop. They began renovations on their newly purchased storefront December 26, 2005. After forty days of renovation the Common Cup was ready to open for business. The name Common Cup was chosen for two reasons. “Common” was chosen to resonate with “Commonwealth” and Virginia Commonwealth University. Common Cup also stands for the Biblical Communion Chalice. On February 2, 2006 Common Cup opened with a limited menu and limited hours. In May, 2006 the business expanded its menu and hours. 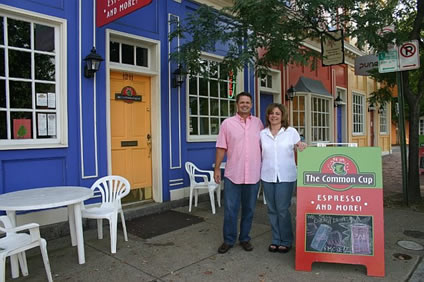 As a Christian coffee shop, the Common Cup plays host to a number of youth groups and other Christian ministry meetings, including weekly meetings of The King James Club. The Common Cup has a partnership with interdenominational Richmond Outreach Center. Visitors to the Common Cup will find many religious pamphlets and other literature on Christianity.