Four of the eight Comboni Missionary Sisters who arrived in the United States from Italy in October 1950 settled in Richmond, residing in a small frame house on Bainbridge Street. In keeping with the vision of their founder, the Sisters came to work with the African American communities of St. Augustine Church in Fulton and Holy Rosary Church in Church Hill during a racially tense period in United States history. Four more Sisters arrived in Richmond in 1953 to help with the growing needs of their ministries. In order to have more room for the new Sisters, they moved into a larger house on Clopton Street. In 1954, the Sisters staffed the St. Gerald’s Maternity Home for unwed African American mothers, an institution that was unique in Virginia during that time period. After segregation ended, the home was opened to all unwed mothers in need of help, love, and support. 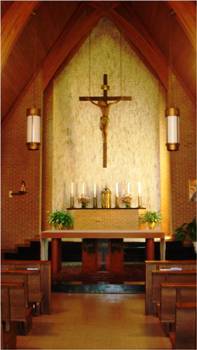 The purchase of property on Lakeside Avenue in 1955 was the first step toward establishing the Provincial Headquarters for the Comboni Missionaries Sisters in the United States. In the same year, Sister Emma Gazzaniga was named the first Provincial Superior for the Comboni Missionary Sisters, which had by that time increased in number. The Sisters opened the Holy Angels Nursery in the large basement of the Provincial House. It was the first interracial daycare in the Richmond area. The daycare outgrew the basement, and in 1959 the Sisters built a separate facility on the Provincial House property. The first four candidates entered the Comboni Missionary in 1960, and they became postulants the following year. Of these three, two made their first profession in 1963. In the same year, the first two Sisters graduated from college began teaching at the newly built Our Lady of Lourdes School. This was to begin the parish relationship between the Comboni Missionary Sisters and Our Lady of Lourdes Church. A new Provincial Superior, Sister Delia Magri, was named in 1964. A year later, the Our Lady of the Angels Chapel and the Novitiate were built and blessed by His Excellency Walter F. Sullivan, the Bishop of the Catholic Diocese of Richmond. In 2000, the Jubilee Year, Bishop Sullivan designated this chapel as a “Pilgrimage Station” for the entire year with plenary indulgence (remission of all temporal punishment resulting from sin so that expiation in Purgatory is not required). The Jubilee year also marked the 50 th Anniversary for the Comboni Missionary Sisters arrival in the United States. This anniversary was commemorated all year, with a closing celebration at the Sacred Heart Cathedral in Richmond on October 10. In May, 2008, the Sisters closed the Holy Angels Nursery and rented the building for a daycare facility. The current community at the Provincial House has eleven Sisters from various cultural backgrounds, including American, Mexican, Italian, Ecuadorian, Spanish, and Vietnamese. They range in ages from 40 to 83. The Comboni Missionary Sisters Provincial House offers public Mass at 7:00 in the morning Monday through Friday and at 8:00 on Saturdays, with services performed by the retired Bishop of Virginia. Typically, around twenty people from the community attend the Mass. 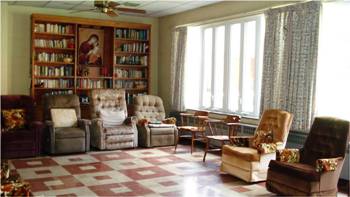 When the Sisters first bought the property on Lakeside it was an “almost new” family style home on six acres. The Sisters lived and worked in the first two floors of the home and operated the daycare in the basement. They built the Chapel and the Novitiate in 1965, making the Provincial House property what it is today. The original 1950s home contains the Provincial Superior’s bedroom, offices, and various artifacts from the countries in which the Comboni Missionaries have served. The Sisters currently spend most of their time in the Novitiate. On the first floor the Novitiate has a kitchen, a dining room, a community room with a library, a laundry room, and study rooms for the novices. The second floor contains the bedrooms and bathrooms. Connected to the Novitiate is the Our Lady of the Angels Chapel, which consists of a worship space, a sacristy for the priest and another smaller room. The Our Lady of the Angels Chapel contains simple stained glass window, a high stained wood vaulted ceiling, and a stone apse. A life size carved wood crucifix is suspended from the sanctuary ceiling. The floor consists of ceramic tiles. The statues of Mary and Joseph, as well as the crucifix are carved wood from Ortisei, Italy. The artistic Stations of the Cross were created by Sister Lucy, who spent many years in Richmond and died in Italy in June 2009. The Provincial House has other works of religious art and paintings. In addition, nestled in the woods on the property, there is a Marian shrine that was built by a widower and friend of the Sisters in memory of his beloved wife. Lining the walls of the corridors of the Novitiate, framed photos depict Sisters in the various countries where the Comboni Missionary Sisters work.

The Sisters live and lead an apostolic life. They have devoted their time to prayer and to service in the outside community. They also perform general upkeep of the Provincial House such as cooking, cleaning, and laundry. They hold Mass at 7:00 in the morning Monday through Friday and 8:00 on Saturday. On Sundays the Sisters attend Mass at their parish Our Lady of Lourdes Church. After breakfast on weekdays, the Sisters engage in various ministries or work in the house. They celebrate all religious holydays, American holidays, and other cultural celebrations in their parish. They also observe celebrations distinctive to the Comboni Missionary Sisters, such as the anniversary of the death of their founder St. Daniel Comboni on October 10 and the Feast of the Immaculate Conception on December 8 when the Sisters renew their vows. The Provincial House annually hosts the Provincial Assembly, a gathering of all the Comboni Missionary Sisters in the United States. The Sisters also take an annual eight day retreat at various retreat houses, such as at the Retreat House for Jesuits in Maryland and the Monastery of the Visitation of the Holy Mary Monte Marie in Rockville, Virginia. The Sisters spend their recreation time together and in spiritual reading. Some Sisters take walks in the neighborhood and parks, and occasionally they will go out for dinner. It is not unusual for friends of the Comboni Missionary Sisters to drop in for breakfast or lunch or just for a visit during the day.

One of the Comboni Missionary Sisters is in charge of the social ministry of Our Lady of Lourdes Parish. On a daily basis she welcomes people who are in need of food and clothing. Another Sister works twice a week in the Office of the Hispanic Ministry at the Pastoral Center of the Catholic Diocese of Richmond. Yet another is spiritual director for the Legion of Mary, a lay Catholic Association. On Sundays some Sisters bring Holy Communion to Catholics in nursing homes and to shut-ins in the surrounding community. Every other Sunday the Sisters conduct an ecumenical prayer service at one of the nursing homes in the Lakeside area. They also visit the sick in hospitals and in their homes. Some Sisters are involved in the catechetical program at Our Lady of Lourdes Church. Once every two months, the Sisters provide and serve a meal to the homeless in downtown Richmond. The Our Lady of the Angels Chapel of the Comboni Missionary Sisters is used every other Saturday evening for a Mass celebrated in the Byzantine rite for a group belonging to the Ukrainian Catholic Church. Once a month, a group of Catholics belonging to the Opus Dei movement use the Chapel for a day of recollection. Moreover, the Chapel is used for small weddings and occasionally for funerals.