Church of the Living God

(Video of a Praise Break)

The Church of the Living God originated in a vision that its founder, Rev. Stephen K. Gyermeh, reported receiving in 1982. Gyermeh, a native of Ghana, had preached the Gospel since he was sixteen years of age and pioneered several churches. According to Gyermeh, God spoke to him in 1982, stating that he should “Postpone all of your scheduled meetings and wait on me for further directions.” Gyermeh then spent the next 21 days praying and fasting as he awaited instructions. Gyermeh reports that he then had a vision in which he walked with Jesus and the disciples and was led into a sea filled with drowning people. Jesus stated, “All these are my people perishing, but they don’t know what to do to save themselves. Go and show them how it’s done…” The following year Gyermeh established the Church of the Living God with just fifteen converts and no place of worship. The Church of the Living God is now headquartered in Hyattesville, Maryland, has over 1,500 members, and has established eleven additional congregations in the U.S. Members come from both African and non-African nations, such as Venezuela, Panama, and the Dominican Republic. Gyermeh refers to the Church of the Living God as an “all-nations church.” 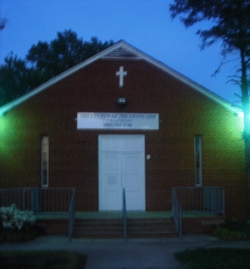 The Church of the Living God Richmond is one of eleven branches that have been established through out the United States as full gospel churches. It was first established on October 5, 1997 as a Bible study group and then evolved into church. Members met for a number of years in rented facilities such as the Holiday Inn and Maude Trevette Elementary School until the current church was established in 2007.

The Church of the Living God in Richmond states that its primary mission is to bring different groups of people together to worship and learn about the Bible. The church is working towards the goal of being an international place of worship in the Richmond area, and the majority of the 120 members who make up the congregation currently are immigrants from African nations, such asGhana, Nigeria, and Liberia. There are also African American members.

The Church of the Living God Richmond holds two Sunday worship services, an early morning and noon service. Between these two services the church offers new membership classes, which focus on teaching new members about the history and mission of the church, and a foundation class, which caters to the individual who have never been to church and are not religious. There is also a Sunday School Program, which provides a setting for the congregation to learn more about the Bible and to ask questions, and a Family and Marriage Class, which offers education about marriage and commitment as well as assistance to already married couples.

The Church of the Living God supports several programs that reach out to the community in various ways. There is a Holy Communion every month and feast day celebrations. The annual Anniversary Program features a revival and fundraising. The annual Picnic of Celebration and Teaching is held each summer to bring the general community together and offer information about the church. There is also a prison ministry that provides gospel service in the prisons, and a Virginia Commonwealth University Bible study group, New Generation for Christ.

Profile prepared by Salem Mengistu
May, 2009