Christ United Methodist Church was chartered in 1950 as a response to the influx of families moving into the Crestview community after World War II. Reverend Earle W. Paylor, Jr. was appointed as the first minister. Members initially met in homes but then starting meeting at the Ridge Elementary School. On December 16, 1951 the church held its first service in the new sanctuary. In 1960 the social hall and Sunday school rooms were added. Christ United celebrated its 55 th anniversary in 2005. Unique building features include the Memorial stain glass windows that were installed during the 1980s. In 1990 a new organ was purchased, and a piano was given as a memorial gift. 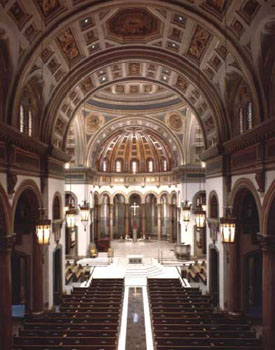 A normal Sunday service begins with a prelude and entrance of the light of Christ, welcome, and announcements. This is followed by a call to worship, responsive prayer, hymn, children’s message, burdens and concerns and the Lord’s Prayer, first scripture lesson, a second hymn, a second scripture lesson, a message by the pastor, and a presentation by the choir. The services usually end with Doxology, a closing hymn, recessional, and Benediction and sung response. The worship services are held Sunday mornings after Sunday school, and a nursery is offered during the worship services. There are over 200 members of Christ United Methodist Church, with about 75 attending on any given Sunday. The members are mostly Caucasian and residents of the Crestview community in Richmond.

There are a number of internal groups and activities at Christ United Methodist. Gadabouts is a group of about twenty senior citizen members who meet monthly for breakfast. There is also a men’s covenant group that meets on a weekday evening. The Christ United Methodist Women hold their meetings on Tuesday night and Wednesday afternoons once a month. There is also a youth group at Christ United that meets twice monthly and consists of junior and high school students. Christ United Methodist is also involved in community outreach projects. Every other year Christ United sends a mission team to Redburg, Kentucky. In the years the volunteers are not in Kentucky they conduct a “backyard mission,” which involves cleaning yards, painting houses and making repairs in the community. There are about 30-35 volunteers for each mission. Christ United supports Crestview Elementary with school supplies and volunteers. The church also collects and donates food for the Lamb’s Basket food bank regularly as well.