In 1897, Richmond resident Mary Shepherd borrowed a copy of Science and Health from an out-of-state relative. Upon reading and studying the book Mrs. Shepherd was healed of a sickness for which she had expected surgery. Her child, as well as a neighbor who borrowed the book, both experienced similar healings. Interest in Christian Science grew and during the fall of 1899 a group of local Christian Scientists organized in the Richmond area. In December 1900 a Christian Science teacher named Alice Bernard came to Richmond after an invitation by Mary Shepherd. This growing group of Christian Scientists met informally at each other’s homes to worship and study together over the next year and a half. After December 1900 a solidified congregation began to take root. Only a month later an application to the Mother Church was sent in order to establish the Richmond congregation as an official branch church. Permission was granted by the Mother Church and in February the church was acknowledged in that month’s edition of the Christian Science Journal. In late 1902 the services moved from private houses to a rented hall near Seventh and Main Streets. A Reading Room, a requirement of every branch church, was also established here. The year 1903 brought with it the threat of a law that would have prohibited the practice of Christian Science. This law never came to fruition and did not shake the congregation, who in 1905 rented and began meeting in Belvidere Hall at Belvidere and Main Streets to house the ever-growing congregation. Eventually in 1906 a site was purchased for the building of an Christian Science church. The foundation for this First Church of Christ, Scientist was laid in 1906 at the northeast corner of Meadow Street and Park Avenue. The first service in that church was conducted in June 1907. However, as the congregation continued to grow it became necessary to build a larger church. The old church building was sold to the Society of Friends and a new church site was selected at the corner of Monument Avenue and Allison Street. The cornerstone for this current church was laid on April 11th, 1929. Services were held in the lower level until the completion of the upper level in April 1937. The church was dedicated debt free on February 4th, 1945. 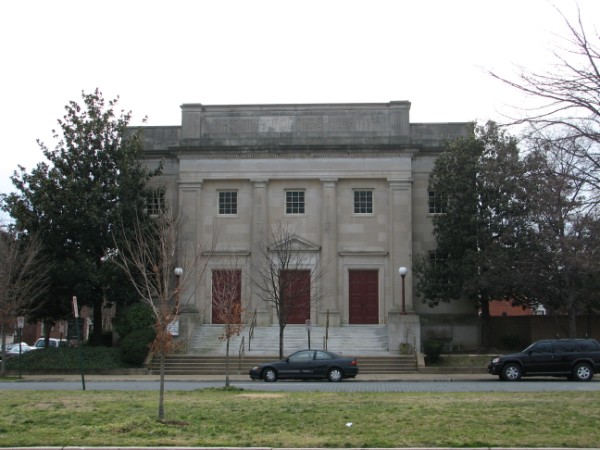 The First Church of Christ, Scientist has a service every Sunday at 11 am. There is no pastor or any other ordained clergy; rather, the Bible and Science and Health with Key to the Scriptures serve as the pastor. The church elects two members every two years to serve as First Reader and Second Reader. The heart of the service is the Lesson-Sermon. This is prepared weekly by the Mother Church in Boston and relayed to each branch church. Therefore, with the exception of some scriptural and hymn selections, the service is identical to the one at the Second Church of Christ, Scientist. During the Lesson-Sermon, the Second Reader reads verses from the Bible while the First Reader reads correlative passages from Science and Health with Key to the Scriptures. The Sunday service also includes hymns, silent prayer, reading aloud of the Lord’s Prayer, recitation of the Scientific Statement of Being, collection, and concludes with benediction. There is also a Wednesday Evening Testimonial Meeting, beginning at 7:30 pm.

Associated UnitsEach Church of Christ, Scientist establishes and operates a reading room, located within the community. The First Church of Christ, Scientist runs a Christian Science Reading Room on North 6th Street. Open to the public, this reading room provides a quiet and peaceful place for studyand meditation. The daily issue of The Christian Science Monitor is available, as well as Science and Health with Key to the Scriptures, and other publications. An attendant is always available during the hours of operation to answer any questions. Address: 6 North 6th Street, Richmond, VA 23219 ph; (804) 643-7730, and h ours of operation are Monday-Thursday 11am-3pm, or by appointment. Holidays and FestivalsThe members of the First Church of Christ, Scientist celebrate all of the traditional Christian holidays, primarily Easter and Christmas. How each of these holidays is celebrated is left to the discretion of the member. Thanksgiving is also regarded as a religious holiday and is commemorated every Thanksgiving Thursday with an 11am church service. Programs and OutreachThe Christian Science Reading Room on North 6th Street is the First Church of Christ, Scientist’s primary method of community outreach. Also, the church does assist local Richmond charity groups on an as-needed basis. Many individual members donate to charities through the Mother Church, as well. The Christian Science Publishing Society, established by the Mother Church in Boston, provides a large amount of community outreach through its publications and website, available to everybody. The publications include the monthly editions of The Christian Science Journal and The Herald of Christian Science, the weekly Christian Science Sentinel, and Christian Science Quarterly. Another popular and highly regarded publication is The Christian Science Monitor, an international daily newspaper. The Christian Science Sentinel Radio Edition is also available to Richmonders, every Sunday at 7:30 AM on WLEE 990 AM. During this broadcast, interviews are conducted and discussions ensue about the meanings of the Bible and Science and Health as applied to current events. The website www.spirituality.com is also a form of community outreach. Open to people of all religious beliefs, this website offers inspirational articles and testimonials on a variety of topics, such as relationships, self identity, and wellness. The weekly Lesson-Sermon can also be read and studied from this site.Membership Size and Composition While no official records of church membership are released, the membership size is modest with people of primarily European-American descent.