Centenary United Methodist Church is located in downtown Richmond. When the church was originally established in 1799, it was located in Shockoe Bottom; in 1810 it moved to Shockoe Hill. By 1827 a larger church was needed, and so a portion of the congregation created Trinity Church in Shockoe Bottom. The Methodist Meeting House on Shockoe Hill was dedicated to serving the western portion of the city; in 1843 Centenary United Methodist Church relocated on East Grace Street. Among the notable historical events involving Centenary United Methodist Church was the use of the first floor of church as an emergency hospital during the Civil War. The Methodist devotional periodical, The Upper Room, was inspired by a sermon by Centenary United Methodist Church pastor, Dr. J. W. Smith. Numerous renovations and additions to the church have been made through its history to create an elegant place of worship. Renovations were made in 1874 to transform it into Gothic Revival architectural style, and the present tower was built. Three years later the first pipe organ was purchased for the church by the Ladies Aid and Circle of Industry. The tower contains twelve chime bells that were hung in 1882, with the largest weighing 4000 pounds. The bells are played daily. In that same year pews with hand carved ends were installed in the church, and in the 1890s the marble baptismal font from New York’s Tiffany and Son was purchased. In 1906 cathedral glass windows were added to the church that depict the life, death, and resurrection of Christ. The current church organ was installed in 1965 and is a 49 rank pipe organ built in Canada by the Casavant Company. 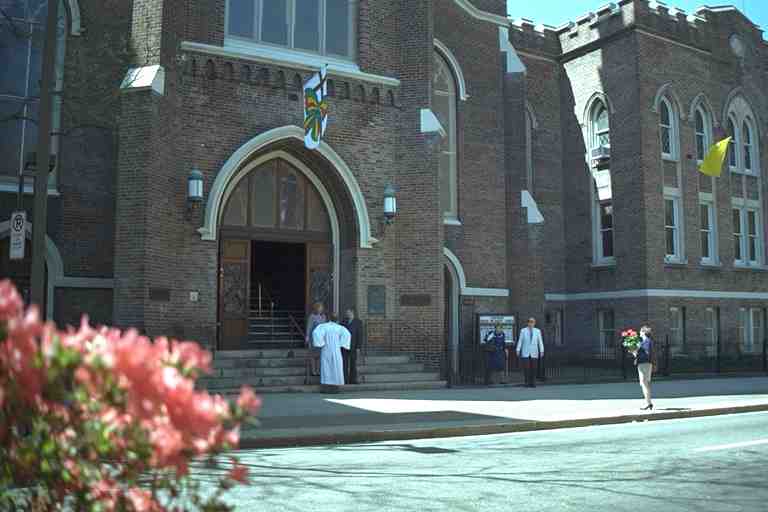 Centenary United Methodist Church has assisted in the creation of five other United Methodist churches. Clay Street Methodist Church was an African American congregation that was renamed A.M.E. Zion and later moved to Boulevard. Several churches were built in the interest of expanding its ministries throughout the city of Richmond: Laurel Street Baptist Church in Oregon Hill, which burned and then joined with St. Andrews in the West End; Park Place, built across from Monroe Park on what is now the Virginia Commonwealth University campus, was destroyed by fire, and later was rebuilt and renamed Pace Memorial Church; and the United Methodist churches at Highland Springs and Highland Park.

Centenary United Methodist Church describes its mission as being “…to be the central urban congregation of the United Methodist Church in Richmond, Virginia; worshipping the living God, exemplifying the life and teaching of Jesus Christ through our fellowship and ministry, and inviting all people to a personal Christian experience.” There are two Sunday morning worship services offered by Centenary. The early service is an informal style worship service, while the late service is best described as formal or high church, employing use of the pipe organ and more traditional rituals. Sunday school is scheduled between the two services. The congregation of Centenary United Methodist Church is primarily composed of Caucasian members, although there are a number of members from African-American, Jamaican, and other cultural backgrounds. Members are drawn largely from the middle to upper middle class families.

Centenary is active in service and missionary ministries. As a member of the Downtown Community Ministries, the church participates in the Walk-In Ministry Feeding Program, offering a meal, and a brief worship time. Centenary United Methodist Church also supports the foot care ministry, Bless My Sole, in the feet of homeless persons are washed and they receive a clean pair of socks. The church sponsors a card ministry through which homeless persons and others in need may send cards to loved ones on Christmas, Valentine’s Day, and other special days. The church also takes part in the Congregations Around Richmond Involved To Assure Shelter (CARITAS). Centenary shares its space with other programs as a ministry of hospitality, and the Virginia Interfaith Center for Public Policy is housed in the building. New Vision New Ventures, uses the building for its program, Bread Winners, an organization aimed at assisting women gain skills necessary to work in the food industry.