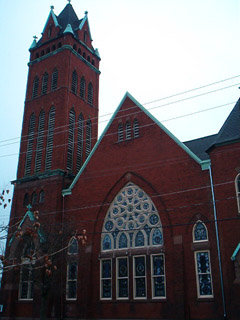 The church subsequently moved from Cedar Street to Mosby Street. However, due to the small congregation size, the church was only able to build a concrete basement for the church. The congretation continued to worship in the basement for several years with the hope of one day building a sanctuary above.

Dr. and Mrs. Benjamin Robertson assumed leadership of the church in 1955. Under his leadership Cedar Street Memorial Baptist Church changed its name to Cedar Street Memorial Baptist Church of God based on the more frequent biblical references to the “ Church of God.” DuringDr. Robertson’s many years at Cedar Street, he has initiated many programs. Among these have been an adult home; the Faith, Hope, and Charity Supermarket; a food and clothing bank; a Sunday morning radio broadcast; and a television ministry campaign. Dr. Robertson and the Cedar Street members built and paid for the 1.25 million-dollar sanctuary with a seating capacity of 1488 that the church has occupied since October, 1980.

Sunday morning services consist of Sunday school and a morning worship service. The Sunday morning worship service consists of prayer, scripture readings, hymns, offering, and sermons. The congregation is predominantly African American, with a few non-African Americans attending services on special occasion. There are activities planned throughout the week, including male choir practice, Bible study, Thursday morning bible class, Dorcas Missionary, and youth meetings. Cedar Street Baptist began their first television broadcast for the church on each Sunday. Currently, Cedar Street is still being televised on Fox channel 35 which this broadcast has been rated No. 1 because more people listen to it than any other broadcast in the area.