The Museum of Virginia Catholic History is located in Richmond’s Fan District, adjacent 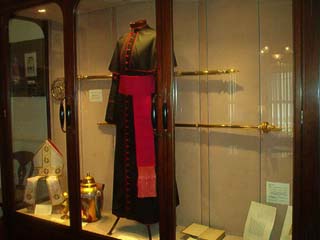 to the Sacred Heart Cathedral and the Catholic Diocese of Richmond. The museum is maintained by the diocese and is staffed by a curator and an archivist. The museum was conceived in 2001 by then Bishop Walter Sullivan. Sullivan noted that many of the priests and previous bishops had accumulated a wealth of artifacts, and that there was no place to display them. At that time work on the museum was initiated, and the facility opened its doors in 2003.

The museum consists of two floors and has several exhibit rooms. There is a collection of artifacts and historical photographs that chronicles the history of Catholicism in Virginia. One exhibit, for instance, displays the one hundred year history of the Sacred Heart Cathedral. Another exhibit shows unusual items from the long history of the Catholic Church in Virginia, such as a portable confessional and a complete “sick call” box used to perform last rites at the homes of the dying. Still another shows many historical 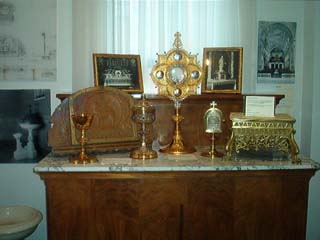 photographs of various churches throughout the state, allowing one to see the many different styles of architecture employed by the Catholic Church.

Artifacts of interest in the museum include items such as a carving by Pope John Paul III, several rare statues from the Italian artist Patterino, and many of the religious garments and accessories worn by officials in the church. These and many other artifacts have been gathered from locations across the state and display the diversity and history of the Catholic Church in Virginia.

The museum is open by appointment to individuals and groups Monday through Friday. Weekend group and school tours may also be arranged. Admission to the museum is free.