The Catholic Diocese of Richmond encompasses the southern part of Virginia, including the Eastern Shore of Virginia. Its territory covers three-fifths of Virginia, some 33,000 square miles and was formerly part of the Archdiocese of Baltimore. Pope Pius VII established the diocese in 1820. At that time it included all of Virginia, a territory that included what is now West Virginia. Pope Paul VI established the current diocese borders in 1973. The Catholic Diocese of Richmond is one of the oldest dioceses in the country. Today there are over 220,000 active Catholics in the diocese and 153 parishes. The diocese also has 204 priests, including about 30 retired priests and about 40 religious order priests. There are 200 religious order women and men serving in the diocese. The diocese is affiliated with 9 Catholic high schools, 23 Catholic elementary schools, 10 Catholic hospitals, and 15 Catholic residential adult care centers. 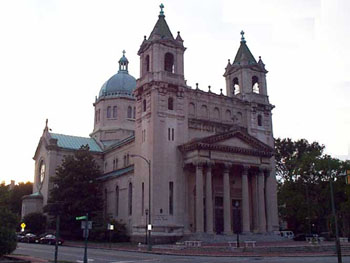 The current bishop, Francis Xavier DiLorenzo, was named Bishop of Richmond by Pope John Paul II on March 31, 2004. Bishop DiLorenzo currently serves in the United States Conference of Catholic Bishops as a member of the Sub-Committee on Asian and Pacific Islanders, which is part of the Committee on Cultural Diversity in the Church. He has served as a member of the Administrative Committee and also as chairman of the Committee on Science and Human Values. During his earlier term as chairman of that committee, he inaugurated a series of popular teaching brochures, reflecting the bishops’ consultations with top scientists on topics such as the relationship of science and religion and ethical issues in the rapidly growing fields of genetic testing and genetic screening.

The Catholic Diocese of Richmond’s lay involvement in ministry is one of its hallmarks. Laywomen and laymen participate fully on every level of ministry. Its ministries include administration, worship, education, formation and fellowship, and extend to care, assistance and advocacy for those in need. As a diocese, the Catholic Diocese of Richmond describes itself as having spiritual and faith-centered people. Full and active participation at worship is a top priority in every parish. The parishes are described as centers of Christian study, learning and formation; liturgical and devotional prayer; liturgical music and art; faith sharing and development; and lively gatherings for worship and for fellowship. The Catholic Diocese of Richmond’s parishes are home base for outreach to those in need, for collaboration with people of other faiths and united efforts with other Christian communities.

The Richmond Diocese is quite diverse racially and ethnically, with Hispanic, Filipino, African American, Korean, Vietnamese, Eastern and Western European members. Many of the Catholics in the diocese are military personnel attached to the large number of military bases in the diocese. The Catholic Diocese of Richmond has ministries for and with children, youth, young adults, adults and older adults; engaged couples, married couples, gays and lesbians, the divorced, the bereaved, the imprisoned, the sick and the dying. The diocese has a twinning relationship with the Catholic Diocese of Hinche in Haiti, and many of its parishes have a twinning and outreach relationship with parishes in that Haitian diocese.

The Richmond Diocese also supports other facilities and services that include day care centers for the young and the old, retreat centers, family and neighborhood centers, special services for children, services for the disabled, Catholic Scouting, Catholic Golden Age, Catholic Campus Ministries, Catholic Charities, Refugee and Immigration Services, Task Force on Aids, Commission for Black Catholics, Commission for Ecumenical and Inter-Religious Affairs, Sowers of Justice, Women’s Commission and a lot more. The diocese has a particular commitment to works of social justice and peacemaking. It is active in assistance, education and advocacy in an integrated approach to the Right to Life including, among many efforts, working to end abortions, to abolish the death penalty, to rehabilitate prisoners, to heal victims of crime, to care for and protect victims of domestic violence, to facilitate adoptions, and counsel for alternatives to unwanted pregnancies and abortions.

Profile prepared by Adwoah Yeboah
May, 2008