Cambridge Baptist Church is located off of Gayton Road in Richmond. On November 3, 1971, Pine Street Baptist Church of Richmond, Virginia voted to form a “satellite” ministry in the West End of Henrico County. This was the beginning of Cambridge Baptist Church. The satellite church began attracting members of the community, and on February 18, 1973 the congregation began meeting in a house that was on the property of the Steward School. Shortly thereafter, the Pine Street Baptist church made the decision to float a $300,000 bond to make it possible for the construction of a building for the church. On February 25, 1981, Pine Street Baptist voted to turn over the satellite to Derbyshire Southern Baptist church for the purposes of giving the satellite the opportunity to become its own church. Turning Pine St. over to Derbyshire increased its opportunity to become independent by increasing church fund availability and access to area land plots. This act of generosity strengthened the ties between the two churches and the satellite mission. As an act of good faith toward releasing the satellite when the time would be appropriate, Derbyshire agreed to secure pledges for a special mission chapel fund up to the amount of $10,000. Hearing word of the small satellite trying to form into its own church entity, the Richmond Baptist Association decided to give $14,000. This was then followed by another generous donation of $5,000 from the Virginia Baptist Board. Finally, the small satellite was able to secure its own position in Richmond as a self-supporting church. On Sunday, April 17, 1988, Cambridge Baptist Chapel was renamed Cambridge Baptist Church. It supported a congregation that included 168 charter members and was growing. 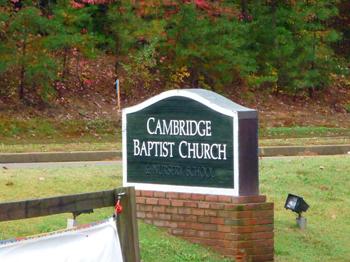 On the basis of its congregation growth, the church decided to put together a “growing in faith” campaign that was designed to raise funds for an educational wing for the church. On June 4, 1995 the church began the construction of the wing after raising more then $320,000. The project came to fruition on February 11, 1996 when the first Sunday school classes and worship services were held. This was a much needed expansion since 223 active members were now attending the church.

The church’s mission statement states that its goal is “To be a family in Christ, joyously worshiping God, growing together in faith, ministering with our gifts and sharing God’s love with our neighbors near and far.” Sunday school services and contemporary and traditional worship services are held on Sunday morning. Membership size is currently around 155 regularly attending members who are mainly of Caucasian background and middle-aged adults with children and teens. 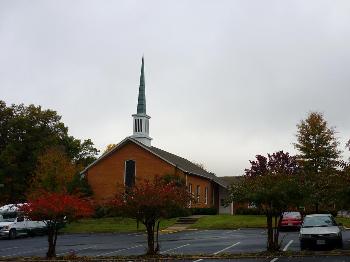 The church supports a number of ministries. Currently the church is affiliated with oversees missions. The church has made mission trips to Belarus, Jamaica and Panama. During these trips members help local residents with various daily activities and present evangelistic concerts. Members who cannot go on the mission trips sometimes contribute their time by hosting children from various countries for six weeks during the summer.

Cambridge has continued a ministry at Lexington Court Nursing and Rehabilitation Center. Since the early 1980s the church has sponsored a monthly birthday party for the residents, providing gifts, refreshments and entertainment. This ministry is conducted by a small group of volunteers consisting mainly of youth and young adults. At Christmas, church members contribute gifts to many of Lexington Court’s residents. The church also participates in Congregations About Richmond Involved to Assure Shelter (CARITAS), an organization supported by area churches each of which houses and feeds homeless individuals for one week during the year. A related program is “ Not Bread Alone” that offers free home-made hot meals and groceries to anyone in need. The program is open 24 hours a day, 7 days a week. Not Bread Alone has social workers on site to assist the less fortunate with issues such as housing, food-stamp application, and health care insurance. The church organizes this program by having its younger members prepare boxed meals and partnering with Faith and Family Baptist Church in providing other services that are needed to support the program.