Bread of Life Ministries began as a thought in the mind of Evangelist Dorothy Hughes in 2001. She was an active member at the Fresh Anointing Cathedral Church of God in Christ. Hughes reports that in February, 1993 Mother Drucilla Carter, a National Evangelist, told her that she would have a church and her son would pastor that church. After this conversation, Hughes began having a small Bible study group in her home on Thursday evenings. In the beginning many people attended the Thursday night service, but attendance gradually dwindled to only a few participants. Hughes indicates that she was discouraged but then was then told by Lucy Hudson that she was to go into ministry and establish a church. After speaking with Hudson , Hughes became convinced that she was moving in the direction that God was leading her. She began her Thursday evening services again but this time in a community center on 25 th Street in Church Hill with only one member, Mother Bertha Williams. Thelma Crawley, owner of Hawk’s BBQ sent word to Hughes that she could use her restaurant on Sunday mornings free of charge to hold services. Hughes held her first service in Hawk’s BBQ in March, 2003. The church was named Bread of Life Ministries. Attendance began to increase. In January, 2004, Hughes son Darryl Hughes, his wife, and their three children joined the ministry. On January 25, 2004 Bread of Life Ministries became Bread of Life Family Worship Center and held its first service in their new building at their current location on Hull Street . Hughes was ordained as Sr. Pastor of Bread of Life Family Worship Center in October, 2005 by Dr. I. V. Hilliard, a prominent Texas- based televangelist and founder of the New Light Christian Center Church . Hughes then ordained her son as Pastor and her daughter-in-law, Michelle Hughes, as Co-Pastor to assist her with the ministry. 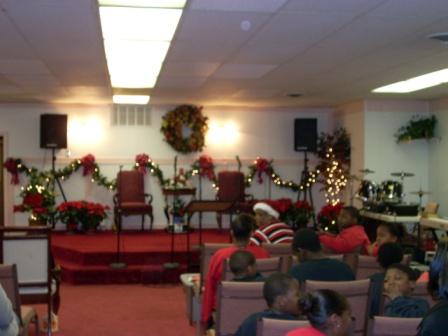 Bread of Life Family Worship Center holds a worship service on Sunday morning and an evening Bible study meeting one evening during the week. Church membership is predominantly African American and numbers approximately 75. The church supports a variety of ministries. The Van Ministry picks up members in the surrounding area for the Sunday morning service. The Praise Team sings and gives testimonies at the Sunday morning worship service. The Praise Dance Ministry gives praise through dance at worship services. Bread of Life Family Worship Center outreach includes supporting about a dozen refugees from Africa with clothing needs, food supplies, and translation of Bible study into English.