Bon Air Baptist Church is currently located on Buford Road in the developing section of Bon Air. The church began within the congregation of Woodland Heights Baptist Church , which wanted to offer a Christian presence to the Bon Air community. Members of Woodland Heights formed the nucleus of the new church, Bon Air Baptist Chapel, in 1952. Sunday school and worship services were established in the old Bon Air Community House.

Dr. Phillip Rodgerson became the church’s first pastor in January, 1953. Through the winter months church membership grew rapidly. To accommodate the growing church membership, the old Bon Air School building was renovated. The following spring ground was broken for the first unit of the present building. In December of that year Bon Air Chapel held their first services in the temporary sanctuary of the educational wing. Sunday evening worship services began, and a training union was organized. Bon Air Baptist Chapel was organized as Bon Air Baptist Church and received into the Richmond Baptist Association in 1957. The following year the church started making plans for the next unit of the building. The majority of members voted to build a new sanctuary. By the 1960s the new sanctuary was completed and baptismal services were held for the first time in the new building. The Reverend Robert F. Cochran came to be the new pastor, and the church continued to grow. 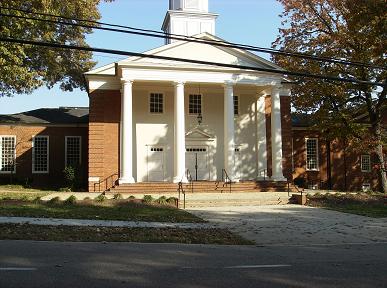 As the congregation grew through the 1970s, provisions were made for additional sanctuary space in the form of transepts, bringing the seating capacity over a thousand. Bon Air Baptist began expanding the rest of the facility and making general improvements. The church added a regulation high school basketball court, a game room for young members to hang out, additional classroom space, a library, and an elevator.

During the 1980s a ministry to internationals was inaugurated. A large portion of the church’s involvement in international missions is through the Southern Baptist International Mission Board. The church hosts both Hispanic and Korean worship services. The Holy Light Korean Church meets at Bon Air once a week for skills classes that include keyboarding, internet computer training, English writing, cooking (American foods), and citizen preparation. Bon Air Baptist Church also established an English as a Second Language course that is a free conversational English class at all levels.

Bon Air Baptist Church is affiliated with the Southern Baptist Convention and has close ties to the Baptist General Association of Virginia . It is a multi-site church, which allows the church to expand its ministries beyond a single location. The congregation currently consists of about 2,500 members, with approximately 1,800 people at worship in several services on the weekends. The worship services include NorthStar Community at Bon Air Elementary School , and the James River Campus (meeting at James River High school ). The worship styles vary, depending on the time and location. The church holds classes on Sunday morning for different age groups. There is a new members class, a new life class for adults 45 and older, college and career class for those between 18 and 23, and Exodus class for members between the ages 25-40. There are Cross Training and Hang Time worship services for teenagers that give students time to hang out and be with other Christians.. The church is predominantly Caucasian, but there is increasing racial diversity among membership and leadership. 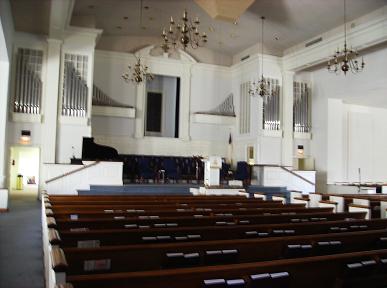 A key part of Bon Air Baptist’s mission is discipleship. Discipling ministries seek to equip Christians to be deeply devoted Christians in word and action. This is accomplished through various ministries such as small groups, age-groups, Bible study, mentoring, seminars, and conferences. Bon Air Baptist Church provides an Endowment Fund for local mission groups. The purpose of the endowment is to support the ministries of the church and mission groups. Some of the groups that the Endowment Fund supports are Crisis Pregnancy Center , Camping Crusade, Ministering to Ministers Foundation, and Shepherd’s Staff Ministry. The church has established a relationship with Congregations Around Richmond Involved To Assure Shelter (CARITAS), a community based organization enabling member congregations to provide shelter and hospitality to homeless people in the Richmond area. Bon Air Baptist Church also provides funding for building materials for Habitat for Humanity, helping families to help themselves. The kitchen staff at Bon Air Baptist feeds over 15,000 at Wednesday suppers each year and over 5,000 people at special events such as banquets, lunches, receptions, and meals for outside organizations. The church hosts a family night dinner every Wednesday. Everyone in the community is welcome; there is a small fee for the meal and no reservation is required.

Bon Air Baptist Church has established a care ministry. This ministry is made up of teams to ensure that attends to the needs of each church member and Bon Air community through counseling, pre-marital counseling for weddings, Hearts for the Homeland, and hospital visitation. The church also has established a prison ministry. Members of Bon Air Baptist Church correspond with hundreds of inmates through Bible studies and letters. The church also dispenses hygiene packages and provides Christmas cards for inmates to send to their families. Christmas cards are also sent to inmates who receive little or no mail.

Bon Air Baptist Church has also established a non-profit organization, Hope Resources Inc. This multi-housing ministry ministers at multi-housing complexes-apartment buildings, mobile home parks, and retirement complexes. The ministry meets at the Bon Air Mobile Home located in the suburban Mobile Village Park . Members read to students, listen to students read, and tutor students in educational basics. The church has developed a partnership with St. Joseph ‘s Villa to minister to families with emotional, physical and mental needs. The church is also in partnership with the Good Samaritan Inn Ministry, and reading and tutoring at Blackwell Elementary School . During the week the public school bus drops second through fifth graders off at Bon Air to receive help with homework assignments..