Bethlehem Lutheran Church was established in December,1852 to minister to the needs of 3,000-4,000 German Lutherans in the Richmond area. It was the first successful Lutheran Church to be established in Richmond. The congregation was founded by a missionary from the Virginia Synod who recruited 70 communicants and 40 male members within one year. He was also able to arrange for the purchase of a church lot for permanent meetings. The original building, located on North Sixth Street, was dedicated on June 4, 1854. Although the congregation had been forged by missionaries of the Virginia Synod (a predecessor body of the Evangelical Lutheran Church of America), in 1856 the pastor submitted a request for honorable dismissal, which the congregation received, in order to affiliate themselves with the Lutheran Church-Missouri Synod.

In 1856 the Bethlehem Lutheran Church opened Luther Memorial School, a day school meeting four days a week. In those early days, monthly tuition was 50 cents for church members, and $1.00 for non-members. Today the parochial school, serving Kindergarten through eighth grade, is operated by the Bethlehem Lutheran Foundation, an outreach ministry of the church. It is the oldest parochial school operating in Richmond. The original church building was sold to St. Luke’s Baptist Church (later called Sixth Street Baptist Church) when the congregation erected a new church in 1920 at the corner of Grace and Ryland Streets. The original building was demolished in 1953 along with the rest of Sixth Street north of Broad Street. 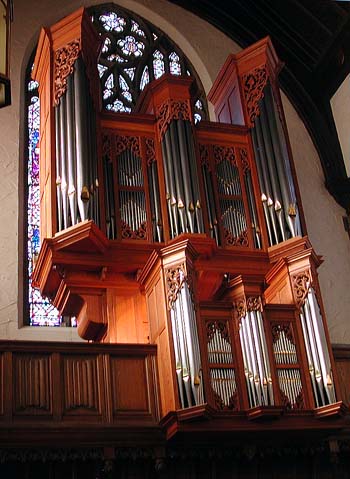 Bethlehem Lutheran Church, having aligned itself with the Lutheran Church-Missouri Snod, is theologically conservative. Church doctrine emphasizes the importance of right belief and maintains that the Bible is the inerrant Word of God, which is still the standard by which Christians should live their lives. Because the Lutheran Church-Missouri Synod has not entered into full communion with other churches, prayer bulletins at Sunday services request that those whose beliefs are “in doubt” or who “hold to a confession different from that of Lutheran Church-Missouri Synod and [the Bethlehem] congregation” speak with the pastor before the service to privately discuss receiving the sacrament of Holy Communion. Bethlehem takes this approach in light of scripture which indicates that it is harmful to a person to receive communion without right belief.

The church reports 629 baptized members and 479 confirmed members, with weekly attendance at approximately 130. The membership is predominantly white and middle-class. Church offerings include a Sunday service, Sunday School, weekly Bible Study, bi-weekly morning Bible Circle, Vacation Bible School, and a Men’s Fellowship group that meets for breakfast once each month. In addition, Bethlehem hosts a number of community events, such as a weekly Spaghetti Dinner and the popular yearly event Oktoberfest, which celebrates the church’s German heritage with German food and music. Bethlehem is also a member of CARITAS, through which it provides temporary shelter to the homeless.

Bethlehem boasts a magnificent Taylor and Boody organ, commissioned for the church in 1983. The hand-crafted Opus 7 is built of solid white oak and has 1,647 pipes. The organ appears on the American Guild of Organists’ “Richmond Organ Tour”.