Congregation Beth Ahabah (meaning House of Love) has a long and rich history in the City of Richmond. From 1835 until the beginning of the Civil War, a significant number of German Jews, mainly from Bavaria, immigrated to Richmond. They emigrated from their native country for a number of reasons, including anti-Semitism and religious restrictions placed on them in Germany, but also for the economic opportunity associated with Richmond’s booming tobacco business. After arrival, this group of immigrants founded Chebrah Ahabat Israel (or The Association for the Love of Israel) not as a religious congregation, but as a social organization. Still new to the city, the German Jewish immigrants worshipped along side the more established Sephardic community at Kahal Kadosh Beth Shalome (meaning the Holy Congregation, House of Peace). Founded in 1789, K. K. Beth Shalome served as the first synagogue in Virginia and sixth in the entire United States. 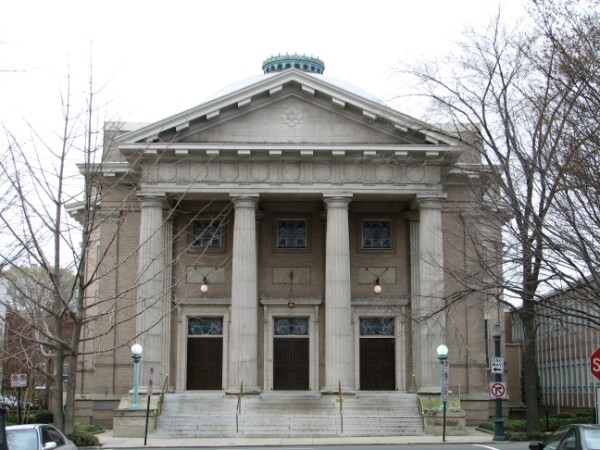 In 1841, the German Jews who founded the Chebrah Ahabat Israel social organization established Kahal Kadosh Beth Ahabah in order to worship in their own tradition. On May 15, 1841, the congregation consecrated a rented house on Marshall Street between Fifth and Sixth Streets. Just sixth years later, Beth Ahabah had grown large enough, with thirty-six members, to require a new place of worship. In 1847, the congregation was able to purchase a lot at Eleventh and Marshall Streets. The purchase had been made possible mainly by selling seats within the synagogue, but was also facilitated by donations from the local Jewish and Christian community. In addition to building a synagogue, which was consecrated on September 22, 1848, a school room was also built to house the first Jewish school in Richmond, which had been founded by members of the congregation in 1846.

By 1867, Beth Ahabah was beginning to show signs that it was drifting from its orthodox roots: Families were sitting together in the synagogue, women were allowed to join the choir, and there was even talk of having a church organ. Beth Ahabah officially became part of the Reform movement in 1875 by joining the Union of American Hebrew Congregations. Official standing as a Reform congregation did nothing but encourage new membership. Beth Ahabah was the largest synagogue in Richmond by 1877, with one hundred members. The congregation, which had already taken to becoming more Americanized with the addition of an organ, would continue projecting this image. The congregation began searching for a new rabbi after the death of the incumbent rabbi, Dr. Harris, in 1891, and required that the applicant be a native-born American.

Dr. Edward N. Calisch, a highly important figure in both Richmond’s religious and social history, was chosen as Beth Ahabah’s new rabbi at the age of twenty-six. Rabbi Calisch made significant changes in the congregation’s worship style and worked at bringing the Jewish and Christian communities closer. As Beth Ahabah continued to grow under Rabbi Calisch, Richmond’s first Jewish congregation, K. K. Beth Shalome became moribund in 1898. Many, but not all, of K. K. Beth Shalome’s congregants came to Beth Ahabah. The newly merged congregation entered the twentieth century with a number of changes planned.

In 1904, the congregation officially moved into its present-day location on West Franklin Street. The location was chosen because it reflected the movement of its congregants to Richmond’s west. At the new location, Rabbi Calisch would continue to serve as the rabbi of Beth Ahabah until 1945. He instituted a number of reforms, one of the most significant being the addition of a Sunday service (which was later replaced with just traditional Saturday services) in 1924. This change was made in order to allow congregants to blend better with Richmond society and commerce. Also during this time, Beth Ahabah had grown to nearly three hundred congregants and included a Sabbath school with one hundred and fifty students. Beth Ahabah celebrated its centennial anniversary in 1941, while Rabbi Calisch celebrated his golden anniversary as the congregation’s rabbi. During this time, Rabbi Calisch and his congregation also rallied against the Nazis, with Calisch delivering a number of speeches on the radio and at other houses of worship, including the First Baptist Church. By 1976, the Orthodox movement had gained strength in Richmond and Temple Beth El overtook Beth Ahabah as the largest congregation in the city.

Beth Ahabah currently has a Shabbat Service every Friday Evening. For most of the year services are in the Sanctuary, but during the summer months services are held in the Gumenick Chapel. There is only a Saturday morning service when there is a Bar or Bat Mitzvah. Beth Ahabah currently uses the prayer book Mishkan T’filah, the Reform movement’s most recent prayer book, for its Torah services. The piano or organ is used for music, which ranges from classical to contemporary. A singer leads the audience, and occasionally the adult choir sings.

The congregation is family-oriented and very active in providing activities for its youth. Once a month, there is a Family Worship Service, during which the youth choir sings. There is also a “Torah Talk,” a parallel worship service for youth during Shabbat Services once a month, and a Tot Shabbat, a service for pre-schoolers and their parents on Saturday mornings once a month.

The Barbara and William B. Thalhimer, Jr. Religious School provides Jewish education for children from Kindergarten to Tenth Grade. The Congregation Beth Ahabah Museum Archives provides a history of Jewish life in the city of Richmond. Beth Ahabah’s cemetery, the Hebrew Cemetery, is located on Fourth and Hospital Streets on Richmond’s north side. Founded in 1816, it also contains a Confederate Soldier’s Section.

Through its Social Action Committee, the Congregation participates in a variety of service projects in the community, including building homes with Richmond Metropolitan Habitat for Humanity. Beth Ahabah also provides shelter and food for the homeless with CARITAS, and cooks monthly for a youth emergency shelter and an AIDS home. Every year, the Social Action Committee sponsors a Mitzvah Day that typically attracts close to four hundred congregation members to perform a wide range of services in the community.

Beth Ahabah’s synagogue, which was formally consecrated on December 9, 1904, was designed in a neo-classical style by the local architect firm Noland and Baskerville (also the designers of St. James Episcopal Church). One of the synagogue’s most beautiful aspects is its ten main stained glass windows, which were installed between 1904 and 1947. Most significant is Beth Ahabah’s prized Mitteldorfer Window (named for the couple to whom it was dedicated by their children, Ellis and Barbette Mitteldorfer), designed by the Louis C. Tiffany Studios in 1923. The window depicts Mount Sinai erupting. An additional thirteen stained glass windows were installed in 1963. The exceptional pipe organ, which is characteristic of “Americanized” Reform congregations, was constructed when the West Franklin location was constructed in 1904. A Torah that is used, Holocaust Torah #1392, was dedicated in 1974 as one of 1544 Torahs from Czech synagogues that were confiscated by the Nazi during World War II.