In 1886 the idea for All Saints Church was conceived by the western movement outreach committee of the Monumental Church, located on Madison Street in Richmond’s Church Hill area. The new location, on the corner of Madison and West Grace Streets, further into the then western part of Richmond, was going to be used as a chapel for evening services along with Sunday School. However, the new chapel was not able to begin its holding services until a debt of 1500 dollars, owed by the Monumental Church, was repaid. Four church members, Peter H. Mayo, James N. Boy, Thomas L. Alfriend, and Thomas Atkinson, took it upon themselves to see that the debt was repaid. It was not long, however, before the small chapel’s congregation had outgrown its limited space. A new chapel was planned for a location on Madison St. between West Grace and Franklin. Once construction was completed the new church took a vote and decided to become independent from their mother church, Monumental Church. On July 18, 1888 the congregation decided to name their church All Saints, marking their independence from the Monumental Church. The first service was held on Christmas day, 1888. Within ten years the congregation had once again grown larger than the church’s facilities. In 1898, All Saints was offered a piece of land at 316 West Franklin and began construction on a new church building. The church remained at its West Franklin Street location until April, 1955 when the church accommodated to the westward movement of the population in Richmond by planning a move to its current location on River Road adjacent to Roslyn. The first cornerstone of the new church was laid on October 27, 1957, and the first services were held March 15, 1959. 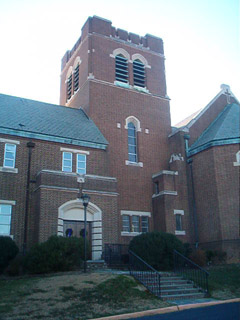 All Saints Church is a traditional apostolic church. The services consist of sermons, delivered by the rector or associate rector; hymns and anthems, in which the congregation is led by the choir of men and boys; and two main doxological patterns, morning prayer and the Holy Eucharist. The traditional Christian holidays of Palm Sunday, Easter, Christmas, and Ash Wednesday are celebrated. Services are held on Sunday mornings, with a healing service modeled after St. Luke the Physician being held on Thursday mornings. The Sunday services are regularly attended by a sum of about 300.

One of the distinctive features of the church is an all male choir that dates to 1899. Ernest H. Cosby was the first choirmaster and organist. The choir’s growth is attributed to an advertisement that was put in the local newspaper offering musical programs for boy sopranos. Once all of the responses had been answered Cosby had assembled forty boys, who began a tradition that remains today. Part of the boy choir is that boys are paid for the time they devote to rehearsal. All Saints has an extensive outreach program. The All Saints outreach committee donates funds to Interfaith Service of Henrico (ISH), Richmond Hill, Young Life, Christian Children Fund, Ronald McDonald House, Peter Paul Development, Safe Harbor, Boys Home, Jacksonfield Home, CARITAS, and Sudanese Lost Boys.