CHRIST OF THE OZARKS TIMELINE

1918:  Gerald Smith earned a degree in Biblical Studies from Valparaiso University in Indiana, then went on to become a minister in Wisconsin, Illinois and Indiana.

1929:  Seven months after arriving in Shreveport, Smith resigned from the church before they could fire him for his continued association with political populist Huey Long.

1936:  Smith and Townsend joined Father Charles E. Coughlin to create the Union Party, which soon faltered due to personal rivalries.

1956:  Smith made a final bid for the White House as a candidate of the Christian Nationalist Party.

1964:  Gerald Smith and his wife Elna M. Smith bought a house in Eureka Springs and made it their retirement home.

1966 (June 25):  The Elna M. Smith Foundation completed and dedicated the Christ of the Ozarks statue, the first of Smith’s five Sacred Projects, with Emmet Sullivan as sculptor.

1966–1975:  Christ Only Art Gallery, Bible Museum and the outdoor amphitheater (to house the Passion Play) were all built.

2013:  The theme park and all land (including the statue) was purchased by the South Central Oklahoma Christian Broadcasting radio ministry.

Gerald L. K. Smith was born to Lyman Z. Smith and Sarah Smith on February 7, 1898, in Pardeeville, Wisconsin. He was descended 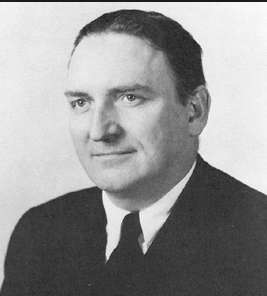 from three generations of Disciples of Christ ministers and, after earning a degree in Biblical Studies from Valparaiso University in Indiana in 1918, became a minister himself in Wisconsin, Illinois and Indiana. Four years later, in 1922, Smith married Elna Sorenson, and they adopted their only child, Gerald L. K. Smith Jr. In 1929, after Smith moved to Shreveport, Louisiana to work as a pastor at Kings Highway Disciples of Christ Church, he met Huey Long, a lawyer and future U.S. senator. Due to Smith’s association with Long, whose populist leanings were controversial, Smith was forced to resign from his post as pastor to avoid being fired by his angry and conservative church directors.

Smith’s close relationship with Long won him a position as a public speaker for Long’s campaign, while allowing him a platform with which to promote his own anti-Semitic and fascist sentiments. Long was planning to become a candidate in the 1936 presidential election but was assassinated in September, 1935. After Long’s death, Smith joined with retired physician Francis E. Townsend and Roman Catholic priest Father Charles E. Coughlin to form the Union Party. The party chose to back North Dakota Congressman William Lemke against President Franklin D. Roosevelt. However, the party experienced divisive personal rivalries, and Lemke’s candidacy foundered.

In the years that followed, Smith found several other ways to promote his controversial views. He formed the Committee of One Million, the Christian Nationalist Crusade, a monthly publication called The Cross and the Flag , the America First Party and the Christian Nationalist party. These initiatives all centered around opposition to communism, liberalism, organized labor, or Jews. The organizations served as a base for several unsuccessful campaigns for both the U.S. Senate and the presidency. In his last bid for the presidency under the banner of the Christian Nationalist Party in 1956, Smith only garnered support from the far-right fringe, although he did have enough contributors to fund his campaign.

In 1964, Gerald Smith and his wife bought Penn Castle in Eureka Spring, Arkansas. This Ozark Mountain town would become their 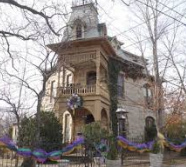 retirement home. Two years after their arrival, Smith began his long-term goal of creating his Sacred Projects and the Great Passion Play religious theme park. The first of these projects was the Christ of the Ozarks Statue, a seven-story statue of Jesus. The statue itself was created by sculptor Emmet Sullivan and, with the help of the Elna Smith Foundation, was completed and dedicated in 1966. The statue was built with more than two million pounds of mortar and steel.

In the years that followed, Smith would add the Christ Only Art Gallery, a Bible Museum and a Passion Play to his great Christian theme park. These Sacred Projects were a significant economic boon for Eureka Springs and so, despite some local criticism, Smith planned another, larger project: “a $100 million, Disney-like replica of the Holy Land, including the Great Wall of Jerusalem, the Sea of Galilee, and the River Jordan” (Jeansonne 2009). However, only the wall was completed before Smith’s death. GeraldSmith died of pneumonia on April 15, 1976 in his winter home in California. He and his wife were buried at the foot of the Christ of the Ozarks Statue.

The statue stands atop Magnetic Mountain and faces west, reportedly to thank Eureka Springs for allowing Smith to create his 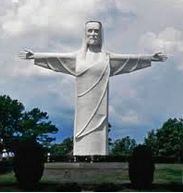 lifelong dream (“Christ of the Ozarks” n.d.). Counting the 1,500 foot-tall mountain on which the statue rests, Christ of the Ozarks (which itself is sixty-seven feet in height) is the third-tallest Jesus in the world. By some accounts, the statue originally had feet beneath its robe, but they were removed to meet height regulations so that a warning beacon would not have to be placed on the top of the head.

Until 2013, Christ of the Ozarks, and the 167 acres of land that surround it, were controlled by the non-profit Elna Smith Foundation, named for Gerald Smith’s late wife. Keith Butler served as the chairperson of the Elna Smith Foundation. Sam Ray was the Executive Director of The Great Passion Play until 2013 and played a major role in the day-to-day management of the statue. However, the organization was unable to meet mortgage and tax obligations, which led to initiation of a foreclosure action by Cornerstone Bank and a search for funding by the foundation (Brantley 2012; Millar 2012). Ultimately, the park was purchased by the South Central Oklahoma Christian Broadcasting radio ministry in 2013 (“Saved” 2013).

This statue has faced a number of obstacles, both prior to and following its construction. The statue’s financial problems began early. Smith began the project with only $5,000 in resources. However, Smith managed to raise $1,000,000 in donations for the project almost immediately (Schick 2013). The project remained solvent until the mid-2000s when declining attendance at the Great Passion Play and a declining national economy combined to create a financial crisis. Long-term financial viability now rests with support from the Gospel Station Network.

The statue has also been the target of some sarcastic humor. Smith chose a sculptor for the project who had never worked on a 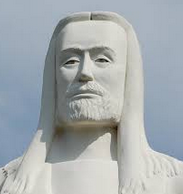 human figure. This has led to ongoing criticism about the shape and features of the statue. Negative comments about the statue include it having no passion behind its eyes, resembling Willie Nelson in a dress, and looking like a milk carton with a tennis ball on top. Locals sometimes refer to the statue as the milk carton with arms. Nonetheless, as one guide at the statue commented, “I don’t really like the statue. The features are harsh and hard. But it’s a memorial to our Savior, and for that it’s fine” (“Christ of the Ozarks n.d.)

A final challenge that appears to have been resolved is the anti-Semitism associated with the entire project historically. For example, Smith commented once that the theme park was “the only presentation of its kind in the world which has not diluted its content to flatter the Christ-hating Jews” (Jeansonne 2009). However, Smith’s death and the appointment of new management have resulted in a much more open and welcoming environment. Subsequently, the Great Passion Play publicly renounced Smith’s views, opening performances with the statement,”We here at the Great Passion Play believe we are all equally culpable for Jesus’ death. No one people group was or is solely responsible. No, it was the sins of the world that put him on the cross” (Brantley 2012). As of 2012, there were more than 7,500,000 visitors to the Christ of the Ozarks statue, and new financial backing appears to have assured its continued public presence.

“Eureka’s Jesus on the Mountain.” Explore Southern History, 2011. Accessed from http://www.exploresouthernhistory.com/eureka6.html on 1 May 2014.

Jeansonne, Glen and Michael Gauger. 2009. “Gerald Lyman Kenneth Smith.” The Encyclopedia of Arkansas History and Culture . Accessed from http://www.encyclopediaofarkansas.net/encyclopedia/entry-detail.aspx?entryID=1767 on 1 May 2014.

Schick, Dennis. 2013. “Great Passion Play.” The Encyclopedia of Arkansas History and Culture. December 2. Accessed from http://www.encyclopediaofarkansas.net/encyclopedia/entry-detail.aspx?entryID=5651 on 1 May 2014.

CHRIST OF THE OZARKS VIDEO CONNECTIONS