2003 Property for the Yearning For Zion Ranch (YFZ) was purchased.

2005 The foundation for the YFZ temple was dedicated.

2011 Warren Jeffs was sentenced to life in prison plus 20 years.

When Rulon Jeffs died in 2002, his son, Warren, assumed the office of President and Prophet of the FLDS. Warren Jeffs was the 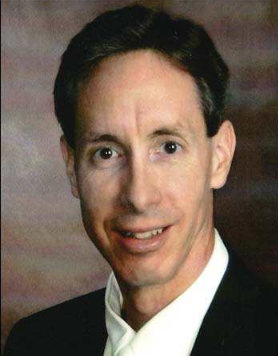 second son of Rulon’s fourth (and favorite) wife, Marilyn Steed. Rulon Jeffs left behind twenty-two wives, many of whom Warren married. Warren Jeffs’ leadership marked a significant shift in key FLDS practices and policies. Jeffs sought to solidify his power and authority in the new policy changes. He called for greater centralization of political and economic power in the person of the prophet. Though the FLDS had already moved to the “one man doctrine” of First Ward governance, Jeffs expanded this doctrine to a new level. Jeffs centralized finances and ordered business owners in the community to surrender ownership. He excommunicated long-term community leaders Dan and Louis Barlow and twenty other FLDS men who challenged the new rules and practices. Their property was seized and their wives and children reassigned to men loyal to Jeffs (Evans 2011). This culminated in a mass exodus of 700 members led by Winston Blackmore to another FLDS community in Bountiful in Canada (B.C.). Jeffs also ousted several hundred teenage boys (Lost Boys”) for violations of community rules. These self-aggrandizing actions created new divisions and conflicts within the FLDS. Critics charged Jeffs with blatant disregard for church law and its officers. It was in this contentious context that Jeffs set about to establish a new FLDS community in Texas.

The property for the Yearning for Zion (YFZ) Ranch near Eldorado was purchased in 2003 by FLDS member David Allred. He claimed the 1,700 acre property was to be developed as a corporate hunting retreat. But construction crews quickly began building log homes to house the new residents and set about working on the new temple. The new construction and the arrival of hundreds of FLDS members in their traditional dress raised deep suspicions and rumors in the neighboring towns, exacerbated by the aggressive claims-making of anti-FLDS apostates and anticult activists (Wright 2011).

The Yearning for Zion (YFZ) Ranch was envisioned as a new “center place” where true believers could seek more perfect lives. 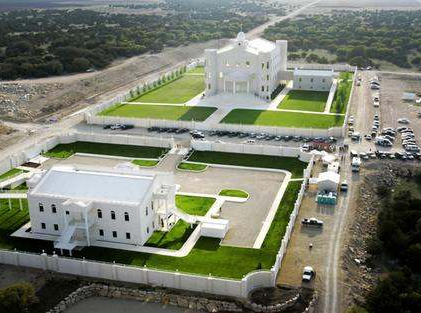 Critics suggest that Jeffs’ intent was to separate his most loyal followers from rest of the fundamentalists in Colorado City and Hildale. Indeed, Jeffs claimed that the Lord had rejected Colorado City as a place where the spirit of God could dwell and that he was led by God to build a new city of Zion and a new temple. Only the most righteous or elect could reside in the new YFZ community. The temple foundation was dedicated in January, 2005. The population of the ranch was estimated to be about 500 at that time.

One of the policy shifts under Jeffs reign was the return to the practice of underage (plural) marriage. In the years leading up to the Warren Jeffs presidency, the age of marriage for women in the FLDS had risen. Martha Bradley (1993) reports that by the late 1980s, the average age of marriage for FLDS women had reached 18 as these women were expressing more interest in waiting to marry and obtaining higher education or professional training outside the community (see also Hammon and Jankoviak, 2011:69). Underage marriages were becoming less common. But Jeffs reversed this trend, promoting underage marriages. 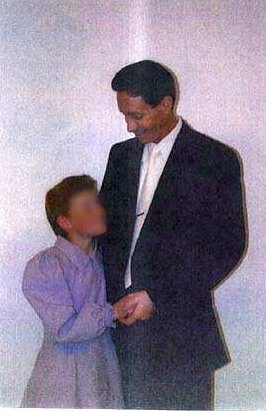 In June, 2005, Jeffs was charged with sexual assault of a minor and with conspiracy to commit sexual misconduct with a minor for allegedly arranging a marriage between a 14 year-old girl and her 19 year-old first cousin. Jeffs became a fugitive to avoid arrest. Photos were later released showing Jeffs celebrating his marriage to an underage girl who was only 12. In late 2005, Jeffs was put on the FBI’s most wanted list. Jeffs was captured in Nevada in August, 2006. He stood trial in St. George, Utah in 2007 and was found guilty on two counts of being an accomplice to rape. He was sentenced to 10 years in prison. But the Utah Supreme Court later overturned the ruling and ordered a new trial due to faulty instructions given to jurors. Jeffs was still in custody when the state of Texas launched a raid on the YFZ property the following year.

On April 3, 2008, Texas state police and the Department of Family and Protective Services (DFPS) raided the YFZ Ranch. Officials alleged that they had evidence of the “widespread pattern and practice” of child sexual abuse. The massive raid was triggered by phone calls to the Newbridge Family Shelter hotline in San Angelo. The caller claimed to be a sixteen year-old girl, Sarah Jessop, who resided at the YFZ Ranch and who said she was raped and beaten by her forty-nine year old spiritual husband. But the raid failed to locate Sarah, and authorities later learned that the calls were a hoax. The caller turned out to be Rozita Swinton, a mentally disturbed thirty-three year-old woman from Colorado Springs. Ms. Swinton, who had previously been arrested for making false charges to police, initially made calls to an anti-FLDS apostate and activist, Flora Jessop, who contacted Texas authorities and forwarded the calls to child protection officials. In an unprecedented action, DFPS officials seized 439 FLDS children at the YFZ Ranch asserting that all the children were at risk of abuse even though the raid and the allegations were predicated on hoax phone calls (Wright and Richardson 2011). The District court granted the DFPS requests for emergency custody, but the Texas Appeals Court later reversed the District court after determining that the state did not have evidence for mass custodial detention and had overreached. The appellate court’s decision was upheld by the Texas Supreme Court (Schreinert and Richardson 2011). Eleven FLDS men, including Jeffs, were charged with sexual assault of a minor.

According to a DFPS report issued December 22, 2008, all but 15 of the 439 cases (96 percent) were “non-suited” (i.e., parents had taken appropriate action to protect children from abuse). All but one of the FLDS children taken into state custody was returned to their parents. However, evidence garnered from the YFZ raid implicated Jeffs in underage marriage practices and led to convictions in Texas on two charges of sexual assault of a child, and he was sentenced to life in prison plus 20 years. Nine of the FLDS men were charged and convicted of sexual assault of a minor, one was convicted of performing an unlawful marriage ceremony, and the other pleaded guilty to bigamy.

The conviction of Jeffs has left the FLDS community in some disarray. Some of the families whose children were seized by the state of Texas did not return. Other FLDS members have left as Jeffs has continued to press his authority from prison. Warren Jeffs’ brother, Lyle Jeffs, was running the daily operations of the church as of 2012.

The leadership of Warren Jeffs represented a power grab and reversal of a trend away from underage marriage. In Jeffs’ trial in Texas, former FLDS member Ezra Draper testified that “FLDS men began taking brides younger and younger after Jeffs took over” (Weber, 2011). Draper also testified that “Jeffs ruled FLDS with a far heavier and crueler hand than his father,” whom he succeeded (Weber 2011). It is important to remember that the FLDS community is almost 100 years-old. The origins of the FLDS date back to the statement of Lorin Wooley in 1912 regarding the disagreement with the LDS church over the decision to abandon Celestial Marriage. The community of Short Creek (now Colorado City/Hildale) was founded the next year. As age of consent laws have been raised over the years in the U.S., the FLDS has been reluctant to make these accommodations to modernity, preferring to live as if they were still residing in the frontier society of the 19 th century. But research suggests that they were making these accommodations, albeit slowly and reluctantly, until Jeffs took over.

While plural marriage or “Celestial marriage” is controversial in its own right, irrespective of the age of consent issue, the broader abuse and forced marriage claims by opponents and critics have to be examined carefully and in context. Some of these claims have been discredited or shown to be wildly exaggerated (Wright 2011, Wright and Fagen 2011). There is substantial research to suggest that FLDS women are not simply pawns of a predatory patriarchal system. Cultural anthropologist Janet Bennion, who has studied the FLDS perhaps more extensively than anyone, contends that these women reveal a unique strength and independence, carving out lives of “female autonomy” and “widespread sharing” (2008:ix). She found that FLDS women had created an innovative matrifocal network that provides shared childcare while pursuing an education or career outside the community. This finding comports with the observations of other scholars and with the results of other studies of the FLDS (Altman and Ginat 1996; Bennion 2004, 2008, 2011a, 2011b; Bradley 1993; Campbell 2008, 2009; Daynes 2001; Driggs 2011; Fagen and Wright, forthcoming). The focus on Warren Jeff’s brief reign and abuse of power distorts the evolved roles of women in the FLDS overall. But it also points to the vulnerability of the FLDS or “First Ward” governance advocating the “one-man doctrine” which concentrates power in the hands of a single individual. As Hammon and Jankowiak (2011:55) observe, the split in the FLDS in 1984 produced two separate wards, and the Second Warders have placed more emphasis on individual choice, personal responsibility, merit, and reliance on a Priesthood Council rather than unwavering allegiance to the prophet characteristic of the First Ward.

As Warren Jeffs continues to insist on ruling the FLDS from prison, it remains to be seen how this will play out among members 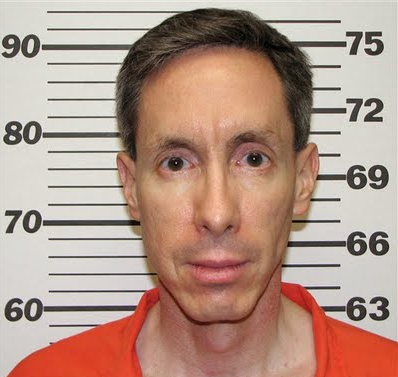 over time: whether there will arise competing prophets to challenge Jeffs’ authority, whether new factions will emerge, or if out of practical necessity those who administer the day-to-day operations of the church become de facto leaders who develop their own authority. Jeffs has imposed even stricter and more rigid requirements on members since his incarceration, dissolving marriages, declaring a moratorium on sex, and attempting to purge the doubters (Dobner 2012; Hollenhorst 2011). He has also issued a series of revelations declaring God’s judgment on the nation for imprisoning him, warning of earthquakes, volcanoes, fires, storms, and floods. But it seems highly unlikely that Jeffs will ever be released from prison, given his life sentence plus twenty years. This permanent sequestration may empower some FLDS members to accept future changes in leadership.

Bennion, Janet. 2011b. “The Many Faces of Polygamy: An Analysis of the Variability in Modern Mormon Fundamentalism in the Intermountain West.” Pp. 163-84 in Modern Polygamy in the United States, edited by Cardell K. Jacobson and Lara Burton. New York: Oxford University Press.

Evans, Martha Bradley. 2011. “The Past as Prologue: A Comparison of the Short Creek and Eldorado Polygamy Raids.” Pp. 25-50 in Saints under Siege: The Texas State Raid on the Fundamentalist Latter Day Saints, edited by Stuart A. Wright and James T. Richardson. New York: New York University Press.

Hammon, Heber B. and William Jankoviak. 2011. “One Vision: The Making, Unmaking, and Remaking of a Fundamentalist Polygamous Community.” Pp.41-75 in Modern Polygamy in the United States, edited by Cardell K. Jacobson and Lara Burton. New York: Oxford University Press.