1874:  Iceland adopted a constitution that guaranteed religious freedom and specified the Evangelical Lutheran Church as its national church, supported by the state.

2013:  Icelandic law was amended to allow religions other than the Evangelical Lutheran Church to register with the state.

2013:  The Zuist Church was registered by the government as a religion with four members.

2015: Zuist churches were established in Denmark, Norway, and Sweden.

2017:  After a period of leadership instability, Ágúst Arnar Ágústsson reassumed leadership of the Zuist Church.

2018:  The Zuist Church applied for permit to build a temple in Reykjavik. 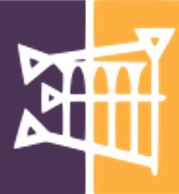 Zuism [Image at right]  emerged around 2010 during a period of dislocation in Iceland. The country’s economy was hard hit by the worldwide economic collapse of 2008, which led to an erosion of confidence in a range of social institutions. Further, Iceland had been becoming increasingly less religious. By this time, less than half of the population identified as religious, about half the number that had so reported just two decades earlier. Younger Icelanders were increasingly likely to identify as atheist (Coleman 2008). Finally, Humanists had been lobbying for a termination of government financial support for the Evangelical Lutheran Church for some time. It was in this sociocultural context that contemporary Zuism developed.

The Zuist church was initially formed around 2010 by Ólafur Helgi Þorgrímsson. However, the potential for the church changed dramatically in 2013 when Icelandic law was amended to allow religions other than the Evangelical Lutheran Church to register with the state. That same year the Zuist Church was registered by the government as a religion with four members. The following year Ágúst Arnar Ágústsson assumed leadership of the Zuist Church. At that point the new church had achieved little success in building membership, and there was a possibility that the government would deregister the church. However, a new group, led by Ísak Andri Ólafsson was successful in gaining control over the Zuist Church in 2015, and it was that group that instituted the plan to refund tax revenues collected by the government to individual church members. The plan to return church tax revenue to church members appears to have been serendipitous. According to one member, “If someone was going to be getting his money, Ólafsson thought it might as well 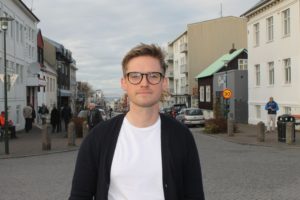 be a group of young troublemakers rather than the church or state” (Wurmann 2016). There was a continuing struggle over church leadership that was resolved in 2017 when Ágúst Arnar Ágústsson [Image at right] reassumed leadership of the Zuist Church. Leadership continued the church program to refund church tax revenue to church members. There was a receptive audience for this initiative in Iceland as national polling demonstrated a solid and growing majority of citizens favored church-state separation. The response to the church’s promise to refund tax money was therefore immediate and striking: in a nation with a population of just over 300,000, more than 3,000 individuals joined the Zuist Church. It is not surprising that Zuism has appealed most to younger, less religious Icelanders who are more likely to connect through the internet (Boldyreva and Grishina 2017).

Contemporary Zuism draws from worship of the Sumerian gods of ancient Mesapotamia. The word “Zuism” 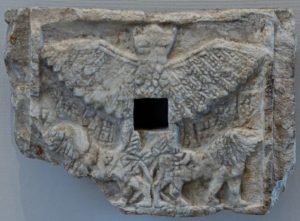 is drawn from the Sumerian verb “zu” (“to know”). The pantheon of Sumerian gods includes An (god of the heavens), [Image at right] Enlil, god of storm and wind) Enki (god of water and culture), Ninhursaq (goddess of fertility and the earth), and Utu (the god of the sun and justice) (“Iceland’s Zuist religion” 2018; Turner 2016).

Zuists term the creative force in the universe “Heaven,” with An as god of the heavens (Ansbrandt 2018b):

Heaven is the active whirling force which proceeds throughout all the heavenly bodies, the Earth, and also all the beings on Earth, generating all of them. It is the whirling force that resides at the centre of all beings, producing their whirl of life. Humans are able to craft Heaven’s force by emulating its order, for good or bad aims.

From a Zuist perspective, it is this force that structures life on Earth (Ansbrandt 2018a):

Zuism is essentially the worship (id est worth-giving) of Heaven, of the north ecliptic and celestial pole and of the constellations which spin around it. It is the knowledge of Heaven, which is an ancient gnosis, returning as a new gnosis for a new era; from this comes the name “Zuism”, zu meaning “to know” in Sumerian (Wolfe 2015, passim). We believe that stars, with their movements, influence the formation and life of categories of beings on Earth. They generate beings out of Earth, either by direct influence or by assimilation of the knowing subject (the star-gazer) and the known object.

Our gods are the stars (Rogers 1998, passim), offspring of An/Dingir (Heaven), the hub of whose vault is the north ecliptic pole winded by the constellation Draco, the Dragon. Our God of Heaven is therefore immanent, not exclusively transcendent (like that of Christians and other Abrahamics): our God is existent.

Humans are capable of and have disrupted the harmony between the stars and human activity. Indeed, it is the disruption of this harmony that has led to the disempowerment and loss of meaning that humanity faces. Zuist practice is about restoring the natural link between Heaven and Earth.

We believe that the disruption of the attunement of Earth with Heaven and its stars is the reason why civilisations degenerate and die, as beings themselves degenerate, their actions become senseless, and institutions lose meaning and become empty logistical machineries (Pankenier 1995, pp. 150–155). The reason why the entire Western world is currently dying is because it has lost its “link with the stars”, which is the original meaning of the word “religion” (literally “re-linking”).

The harmonisation of human (earthly) activities with the movements of the stars, with the gods, is the practice of Zuism and the way for wellbeing, for good life. Zuism is the means to bring the “lords of Heaven down to Earth” (the literal meaning of Anunnaki ), to “square” the latter, Ki, providing her with forms.

To this point in Zuist Church history, there has been little ritual practice. Zuists sometimes sing Sumerian poems to honor An, Enki, and other forces of nature.

Its religious organization notwithstanding, it is clear that the primary mission of the Zuist Church at this time is political. The Zuists’ website announces that:

In terms of its religious mission, the Zuist Church sees itself as part of a potentially worldwide spiritual 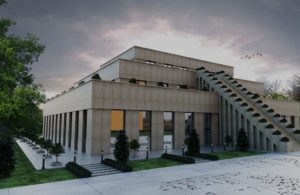 renewal. The church filed an application with the state in 2018 to construct a Temple of Heaven [Image at right] in Reykjavik that would be a center for this renewal:

As the coalescence of a new gnosis, a new ark of knowledge for the awakening and spiritual heightening of human beings, the Zuist Church needs a physical centre of presence to align with Heaven and study and emulate its order, thus providing a cosmic focus. Iceland will be at the forefront of the Zuist spiritual renewal, and the centre of the Zuist Church in Iceland will be the Temple of Heaven in Reykjavik (Ansbrandt 2018b).

The construction and directional alignment of the new temple are critical to its spiritual mission. As Ansbrant (2018b) states, “By aligning with the Earth’s axis of rotation, the temple would connect to the whirling force of the north celestial pole, which in turn rotates, through the precession, around Draco and the north ecliptic pole, thus ultimately linking to the heart of An.”

With respect to its political mission, since the 1870s, Icelanders have been required to register a religious preference with the state. Individual choices are a religion recognized by the state, a religion not recognized by the state, or no religion. Children are registered into the religion of their parents at birth. The Icelandic tax system differs from that in a number of European nations where taxpayers often pay an addition to their normal income tax to support religious organizations (Lam 2015). In Iceland the “parish fees” (sóknargjald) used to support religious organizations comes out of a congregation tax that is part of the income tax (Brunson 2015). A portion of tax paid by all taxpayers over the age of sixteen (parish fees) is distributed to the several dozen recognized religions, with remaining money accruing to the government and a majority has affiliated with the Evangelical Church of Iceland.

From the Zuists’ point of view, the issue is not simply financial support for registered religious organizations but financial penalties for others. As one Zuist spokesperson noted, “There is no opt-out. Those who are unaffiliated or belong to unregistered religions effectively just pay higher taxes…” (Sherwood 2015).

In addition to its own organizational infighting, the Zuist Church has received considerable negative media attention. There have been reports that Ágúst Arnar Ágústsson and his brother, Einar Ágústsson, “are suspected of having defrauded investors through the crowdfunding site Kickstarter where the solicited funding for the manufacturing of multi-use data cables and portable windmills” (Sherwood 2015; Bergson 2015). And a Progressive Party member, Stefán Bogi Sveinsson, pressured the church to de-register since it is not a legitimate religion:

No one has registered in the organisation to practice Zuism itself,” he wrote, according to a report in the Reykjavik Grapevine. “Their reasons for registering are rather twofold: to get money in their pockets, or to protest against current legislation about religious organisations” (Sherwood 2015).

For its part, the Zuist Church envisions more sweeping changes in Icelandic law. These include the abolition of the government’s registry of citizens’ religious affiliations, which would include abolition of automatic registration of infants as members of the parents’ affiliation, and elimination of the clause in the Icelandic constitution designating the Evangelical Lutheran Church as the state church (Turner 2016; Lam 2015). More broadly, the Zuists seek complete separation of church and state. In this goal, the Zuists have majority support from the Icelandic citizenry. In addition, as one spokesman for the Zuist Church points out:

It’s getting expensive to the state,” said Guðmundsson. Zuism is costing the Icelandic government $30 million Icelandic krona annually (around $230,000) which the religion distributes to its members—nearly $80 for every Zuist (Lam 2015).

The issues remain unresolved, however, as the national government is pushing back. Tax authorities have announced that Zuist Church members will be required to pay income tax on any refunds of parish fees to church members (“Icelanders Flocking” 2015). It also remains to be determined whether the Zuist Church will prioritize a religious or political mission or be able to broaden its currently narrow issue and support base. On the one hand, the church has asserted its intent to disband once its political objectives are achieved. On the other hand, the church’s recent application to construct a temple in Reykjavik where members can gather and rituals can be performed appears to be an initiative in a longer term religious direction (“Iceland’s Zuist Religion” 2018; Jones 2015).

There is also a possibility that Zuism will come into conflict with various representatives of the Christian tradition in Iceland. Church spokespersons have at least suggested the possible illegitimacy of Christianity (Ansbrandt 2018a):

It is logically inferrable that, according to the Zuist vision, Christianity (at least in its modern, dying corrupt forms and institutions) and Islam are false religions, or non-religions, since they fail to relink Heaven, Earth and humanity. Our God is existing, as the starry sky and its cycles; their God is non-existing, as an otherworldly abstract thing.

“Icelanders Flocking to the Zuist Religion. 2015. ” Iceland Monitor, December Accessed from https://icelandmonitor.mbl.is/news/politics_and_society/2015/12/01/icelanders_flocking_to_the_zuist_religion/ on 30 May 2018.

“Iceland’s Zuist religion to Apply for Permit to Build a Temple in Reytkjavik.” 2018. Iceland Monitor, May 30. Accessed from https://icelandmonitor.mbl.is/news/politics_and_society/2018/05/30/iceland_s_zuist_religion_apply_for_permit_to_build_/ on 30 May 2018.

Rogers, J. H. 1998.  “Origins of the ancient constellations: I. The Mesopotamian traditions.” Journal of the British Astronomical Association 108:9-28.

Sherwood, Harriet. 2015.  “Icelanders flock to religion revering Sumerian gods and tax rebates.” The Guardian, December 8. Accessed from  https://www.theguardian.com/world/2015/dec/08/new-icelandic-religion-sumerian-gods-tax-rebates-zuism on 20 May 2018.

Turner, Page. 2016. “Icelandic Religion Zuism.” On Faith, January 26. Accessed from https://www.onfaith.co/text/5-things-to-know-about-the-new-ambiguous-icelandic-religion-zuism on 30 May 2018.