1998:  Hyun Jin Moon was appointed as vice-president of the Family Federation for World Peace and Unification (FFWPU), the main organization of Reverend Moon’s Unification Movement.

2016:  Supporters of Hyun Jin Moon founded the Family Peace Association as a separate organization from FFWPU, with Youngjun Kim as president. 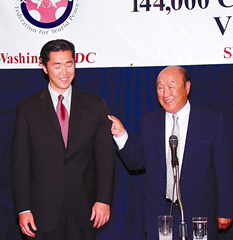 Moon (1920-2012) as head of the Unification movement, and for defining the mission and purpose of the Family Federation for World Peace and Unification (FFWPU), its main spiritual organization, and the Universal Peace Federation (UPF), its main cultural organization. These controversies are rooted in claims to authority of various members of the Moon family and a group of leaders of organizations within the movement. How the schisms were generated and the early career in the Unification Movement of Hyun Jin Moon is detailed in the profile of the post-2012 (i.e. post-death of Reverend Moon) Unification Movement on this website.

In 2016, FPA was inaugurated by supporters of Dr. Hyun Jin (Preston) Moon, the eldest surviving son of Reverend Moon. [Image at right] He should not be confused with his younger brother Hyung Jin (Sean) Moon, who heads another splinter group in the Unification Movement, The Sanctuary Church. Hyun Jin (Preston) Moon is normally referred to as “Dr. Hyun Jin Moon” by his followers based on an honorary doctorate he obtained from Sun Moon University, the accredited university operated by the Unification movement in Korea, in 2005. He also earned a MBA degree from Harvard Business School and a BA in History from Columbia University.

In 2009, Hyun Jin Moon had separated from FFWPU, where he had previously held important leadership positions, and had

formed in the Seattle area the Blessed Family Community, later Blessed Family Association. [Image at right] Hyun Jin Moon believed FPA was in fact replacing the Family Federation for World Peace and Unification (FFWPU) as the legitimate heir of Reverend Moon’s legacy. He considered that FFWPU had failed its universal, non-sectarian mission of realizing God-centered, ethical societies and had been transformed into just another religious denomination, something Hyun Jin claims Reverend Moon never wanted.

FPA sees God as “the ultimate source of happiness, freedom, peace, and human rights” (Family Peace Association 2016a). Each human being should cultivate his or her character and capacity to love through a personal relationship with God and extend that love to one another. Human beings, as eternal spiritual beings, can only find meaning and value in themselves by living a moral and virtuous life. A key point in developing one’s unique individual personality and realizing one’s personal potential is to fulfil one’s God-given responsibility through making moral choices and actions in harmony with the “universal principles and values that God established at the beginning of creation.” Thus, for FPA, “the human portion of responsibility” is pivotal for the realization of the Kingdom of God on Earth, even though “God’s portion of responsibility” (expressed through God’s providential work on earth), represents the main component (Family Peace Association 2016a).

For FPA, the traditional extended family (man-woman-child and three generations of grandparents, parents and children) has a status higher than any other institution or organization, including any church or religion. It is seen as the “school of love” because, when centered on God’s love, it becomes the building block of peaceful communities, nations, and a peaceful world order.

The family is considered to be the central unit of society, as it embodies the full expression of God’s masculine and feminine qualities, manifested in the unity of man and woman as a complementary pair in marriage, as well as an array of inter-relationships among spouses, grandparents and siblings that effectively foster the development of character. The most fundamental attribute of God-centred families, and what binds them into a whole, is the practice of “true love,” meaning “living for the sake of others.” Such families are considered to manifest the core of God’s own nature and his central ideal; they are considered to be the model of the loving relationships required for “the peaceful, ideal world” (Family Peace Association 2016b). A detailed treatment of the significance of the three-generational family for societal stability and renewal can be found in Chapter Four of Hyun Jin Moon’s book Korean Dream (2016 [Korean edition, 2014]). The book deals with the possibility, and the spiritual meaning, of a peaceful reunification between North and South Korea. It enjoyed considerable success in South Korea and was selected as Book of the Year in the “Social” category by the Korea Printing and Cultural Art Award Committee.

One can ask the question whether FPA is a religious organization. FPA does not define itself as a church but as a movement of ideal families, not all with the same religious beliefs and practices. However, FPA’s core membership does share certain ideas on the messianic role of Reverend Moon and his lineage, and regards as important the maintaining of many of the original ceremonies instituted by Reverend Moon.

In interviews the author conducted in 2016 in the Seattle area and in Korea, the typical answer was that FPA is a “faith community” in contrast to a church, and is open to all families that wish to live a life “centered on God.” FPA claims that its philosophy and activities are based on universal principles and values, which are said to represent the core teachings of Reverend Moon as well as of other world religions.

“Follow your conscience” is an answer often received in the author’s interviews about questions of doctrine. However, not without precedents in other traditions: see, for example, in the Catholic Church, the analysis of conscience by John Henry Cardinal Newman (1801-1890). FPA believes that conscience does include within itself certain universal truths, which are also the core teachings of Reverend Moon’s Divine Principle. They include the primacy of selfless love, traditional family as a divinely ordained institution, and harmony with, and ethical mastery over, nature. When I asked what characterizes a member of FPA, a typical answer was “a desire to support the vision and mission of FPA and substantiate the doctrine of FPA, as set forth in the unaltered Eight Great Textbooks of the late Reverend Moon, in oneself, one’s family, larger community, and in one’s nation, and the world.”

FPA continues practicing the main rituals and sacraments established by Reverend Moon, including daily studies of a set of holy scriptures (the “Original Eight Textbooks”), the Blessing marriage ceremony, and the celebration of the four main holy days: True God’s Day (now called in the FFWPU the “Heavenly Parents Day”), True Parents’ Day, True Children’s Day and the True Day of All Things (i.e. of the Creation). It also maintains the Seong Hwa funeral ceremony, birth and infancy ceremonies, the ritual use of candles, and the use of “holy salt” for purification. Basically, there are no rituals specific to FPA. The rituals and sacraments are those of the Unification movement as dictated by Reverend Moon, omitting those changes and reforms introduced by Mrs. Moon, who came to control the FFWPU after her husband’s death.

FPA is, at the time of writing (2017), conducting a “worldwide Blessing movement” through which it hopes to greatly multiply its network of international families. The “Blessing” incorporates a marriage ritual and an educational seminar on “God-centered family values.” In the marriage ceremony, couples declare their commitment to realizing “ideal families,” that is, families that practice selfless love toward one another and toward other families. The Blessing marriage ceremony has the significance of “grafting onto the lineage of God” and is considered to be the substantial fulfilment of the Eucharist initiated by Jesus Christ.

FPA has now some 2,000 members. The largest chapters are in Korea, Japan, and in the U.S., where Jinman Kwak [Image at right]

FPA sees as its main challenge being able to persuade secular societies to accept and live by what FPA considers to be the core principles and values central to all religions, such as the firm adherence to a personal moral code rooted in conscience and universal, absolute values; respecting the sanctity of the traditional family; and empowering ethical leadership. Through outreach based on practical solutions to problems involving the individual, family and social institutions, it hopes for the ultimate transformation of society into an order corresponding to “God’s original ideal.”

On the internal level, as well, FPA has set for itself goals that might be regarded as quite ambitious, as its aim is forming “the individuals and families that God wishes to see,” who would live in accordance with high moral standards. In return, the “blessed families” would achieve the “inner peace and freedom as God’s sons and daughters,” which would also be the touchstone for societal renewal.

All this is obviously not easy in a secular society. In some countries, FPA has also been criticized by the anti-cult movement as part of the latter’s criticism of Reverend Moon and his organizations in general. Other branches of the Unification movement dispute the legitimacy of FPA as heir to Reverend Moon’s legacy.

Family Peace Association. 2016a. “Who We Are.” Accessed from http://familypeaceassociation.org/who-we-are/ on 9 March 2017.