1962:  The Universal Life Church was incorporated.

1999:  Hensley’s wife, Lida, assumed the presidency of the church.

Kirby J. Hensley was born on July 23, 1911 in the mountains of North Carolina. He was raised in a Baptist family. Hensley dropped out of school after the third grade and never learned to read or write, but he continued his study of religion throughout his life. 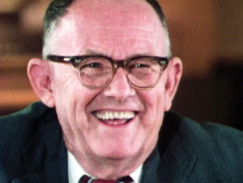 Following a divorce from his first wife, Kirby met and married his second wife, Lida, in North Carolina. The couple then moved to Modesto, California, where, according to the church’s website, “Henley started to wrestle with the idea of forming a church for all people” (Universal Life Church website n.d.). Henley’s initially located his “ Life Church” in the garage adjacent to his home. During this time Lida served as the church’s secretary, in addition to working at a nearby Campbell Soup factory. On May 2, 1962, Hensley incorporated the Universal Life Church with a partner, Lewis Ashmore, who served as vice president. Hensley was the dominant presence in the ULC, serving as church minister and president of the Board of Directors until he passed away in 1999. Lida assumed the presidency and served until her own death in 2006. The Hensley’s son, Andre, succeeded his parents as president.

The ULC website summarizes the church’s beliefs as follows:

The Universal Life Church has no traditional doctrine. We as an organization believe in that which is right. Each individual has the privilege and responsibility to determine what is right for themselves, as long as it does not infringe on the rights of others. We do not stand between you and your God. We are active advocates of the First Amendment of the Constitution of the United States of America” ( Universal Life Church n.d.).

The ULC’s central tenet, therefore, is “do that which is right,” so long as this does not infringe upon others, and its members are strong supporters of freedom of religion. The primary way that the church has chosen to promote religious freedom is by ensuring “that legal and social privileges traditionally enjoyed by men of the cloth – the right to perform marriages among them – should be available to all” (Mead 2007).

The Universal Life Church performs ordinations several times every week. The ordination was originally free, but now the church charges a fee for ordination and requires prospective ministers to submit an application. The church is careful to stipulate on its website that the ordination applications are reviewed and not granted automatically. Once ordained, ULC ministers are authorized by the church to perform weddings, funerals, baptisms and church services. According to Andre Hensley, the church was issuing 4,000 ordination certificates monthly and had ordained 18,000,000 around the world by 2004 (Myers 2004).

The church also offers various other degrees. According to Mead, “U.L.C. ministers can apply for one of about a hundred and fifty religious titles, including Cardinal, Lama, Reverend Mother, Swami, Magus, Martyr, Goddess, Angel, or Apostle of Humility” (Mead 2007). The church’s advanced degrees also include Doctor of Universal Life or even Doctor of Divinity, which the ULC famously issued to journalist Hunter S. Thompson in the late 1960s. Acquiring these degrees generally involves taking coursework and passing an examination.

The headquarters of ULC church are located in Stanislaus County, Modesto, California; local congregations exist in the U.S., Canada

and a number of other nations around the world. The headquarters church, which is administered by a staff of six, holds weekly church serves as well as issuing ordination certificates. The church can accommodate a hundred fifty people at its weekly services. During his lifetime Kirby Hensley was both the minister and president of the board of directors. Church leadership has remained within the Hensley family since its inception as Hensley’s wife and then his son succeeded him. The ULC is a member of the Committee of NGOs to the United Nations.

ULC experienced a schism over financial and legal issues in 2006. The result was a new church, the Universal Life Church Monastery, which provides equivalent services to the parent church. This sectarian offshoot claims to have ordained more than 20,000,000 new ministers (Burke 2007).

Shortly after its inception the church became embroiled in political controversy as would-be draft resisters sought to become ULC ministers in the mistaken belief that ministerial status would exempt them from military service. Abbie Hoffman promoted this tactic in his 1971 book, Steal This Book.

Since the 1970s the ULC has faced legal difficulties regarding its tax-exempt status and the legitimacy of its ordinations. In 1974 the IRS questioned whether the ULC was in fact a legitimate church and demanded tax payments of more than $10,000 dollars from the Modesto headquarters. The church objected and brought suit in Universal Life Church v. United States of America. At the end of the proceedings “the judge ruled in favor of the ULC, solidifying 501(c)(3) tax exempt status for the organization” (Universal Life Church Legal Cases n.d.) However, in 1997, five years after the church had filed for bankruptcy, the IRS once ordered the church to pay federal taxes, prompting the ULC to sue the IRS again. This time the court ruled against ULC as the church’s bankruptcy had nullified the church’s tax-exempt status. Following these legal actions the IRS now treats ULC like any other church as it determines the church’s tax-exempt status on a year-to-year basis.

Another set of controversies have occurred at the state level concerning ULC ministers’ right to perform the rite of marriage. Journalist Daniel Burke noted that the ULC “has a tangled history with other states’ marriage laws. The Supreme Courts of New York, Virginia and North Carolina have invalidated marriages performed by Universal Life Church ministers” (Burke 2007). The results of legal cases on this issue have been mixed. In 2001, Utah governor Mike Leavitt signed legislation “stat[ing] that certification, licensure, ordination or any other endorsement received by a person through application over the Internet or by mail that purports to give that person religious authority is not valid” (Welling 2002). The State of Utah also took exception to ULC ministers officiating at marriages. Utah Assistant Attorney General Joel Ferre argued that, “Nothing prevents you from sending the name of your dog over the Internet and getting them ordained as a minister in the church” (Welling 2002). However the federal courts ruled in 2002 in Universal Life Church vs. State of Utah that Universal Life Church ministers do have the right to officiate marriages. In Pennsylvania “ a judge in York County, Pennsylvania, ruled that ministers who do not have a ‘regularly established church or congregation’ cannot perform marriages under state law’ (Burke 2007). The ruling had the potential to invalidate marriages that had been officiated by ULC-ordained ministers, and has resulted in opposition from the American Civil Liberties Union.

More generally, the ULC has faced opposition from traditional mainline denominations opposed to same-sex marriage, as many ULC ministers become ordained in order to officiate same-sex weddings. Hensley himself married a female couple at the 1971 Universal Life Church Festival. The church also has experienced negative media coverage. A 2011 New York Times article, for example, referred to the ULC as “the McDonald’s of the wedding industry” (Rosenberg 2011), and a Knight Ridder article reported that “mainline pastors cringe at the get-it-quick certificates” (Myers 2004).

Myers, Randy. 2004. “With the Web, $5 and five minutes makes a minister.” Knight Ridder Newspapers, August 6. Accessed from http://wwrn.org/articles/3635/?&place=united-states&section=other-groups on 13 November 2011.